Tower of God Wiki
Register
Don't have an account?
Sign In
Advertisement
in: Characters, Rankers, Males,
and 6 more
English

Yuryu has fair skin and a medium brown hair. He was wearing an orange sleevless traditional jacket and dark blue pants. He also has bandages on his forearms and ankles. 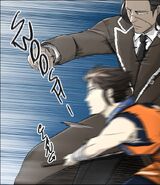 As part of the Advance Team from the 4th army corp of Zahard's Army, Yuryu was sent to the Last Station, because of Zahard's Orders. Their mission was to kill everyone on the Hell Train.

After the train was stopped by other Rankers right before docking to the Last Station, Yuryu and Misebichi went to scan the train. Yuryu was using his Observer, when suddenly Karaka stepped out of one of the doors of the Hell Train. Misebichi attacked the Slayer immediately. The moment Yuryu rushed towards Karaka, Ha Yuri Zahard showed up and used Green April to attack the FUG member. The Princess ordered others to stay away, she wanted deal with Karaka herself. After greeting the Princess of Zahard on the battlefield as is customary, Yuri was fighting the Slayer alone. Nevertheless Karaka attacked others when the opportunity arose. At one moment Karaka picked Yuryu as a target and killed him in a single blow.

Yuryu was a Scout and he was using 2 Observers at the Last Station. He seems to be using a weapon that look similiar to sword that was equipped with yellow light Shinsu.