Yuni Sona has light blue hair, eyebrows, and eyes. He appears a bit androgonous, but due to no other feminine markers, it can be assumed he is male.

As a C-rank regular, and the leader of the regulars in his group, he must be quite a strong regular. But apparently he is no match for Twenty-Fifth Baam and was beaten with one shinsu shot from Baam's orb. 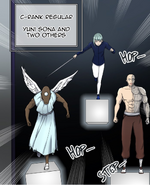 Yuni Sona and his crew. 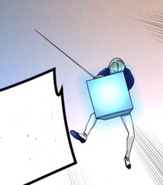 He is shown as one of the sponsored regulars helping Zahard's Army to annihilate the regulars on the Hell Train. He shown with his two subordinates, but is defeated with one attack from Baam.