Yuje (유제, Yuje) is a Wolhaiksong member who worked undercover as a Test Administrator on the 21st Floor. After helping save some of Baam's allies, he saw Urek Mazino off at the Floor of Death.

Yuje has a slightly effeminate look with short black hair, fair skin and blue-grey eyes. While working undercover as a Test Admin he wore a dark formal suit. 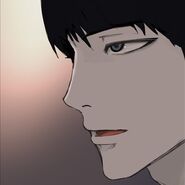 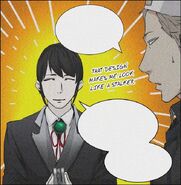 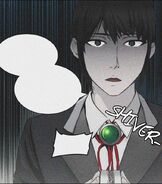 After the Zygaena's Flower Test, Urek Mazino handed Zygaena's baby over to him and told him to contact Yuri Zahard. Yuje then noticed the wound that Viole had given Urek and told him to be more careful around Rankers, even if he was very strong. He then received the task to find someone to keep a eye on Viole, and he gave the job to Hachuling, who subsequently received assistance from Lero-Ro and Quant Blitz.

He appeared with Urek having helped to save Yeon Yihwa and Hong Danhwa from the aftermath of Yuri Zahard's decimation attack. When Danhwa awoke, he asked if they had seen a small crocodile anywhere but Urek replied that Yuje had only seen and saved the two of them. Then, after hearing that Baam's team had gone to to 43rd Floor, Urek suggested they better go there too.

After arriving at the 43rd Floor, Yuje gave Urek a special anklet that masked his power but would break if he used more than 5%. With Urek nonchalantly brushing it off, Yuje added that the boss said not to break it or Garam would dump him.