Data Yu Han Sung is an artificial character, a young version of the Advance Ranker Yu Han Sung back when he was still a Regular. It was created by the Hidden Floor system after the real Yu Han Sung finished all the tests on the Hell Express and saved his data in the system.

Since he was young as a regular, the real Yu Han Sung has been planning to reach the Hidden Floor because he wanted to meet the young data version of Khun Eduan, one of the Great Warriors, and the family head of Khun Family. This is the reason why Yu Han Sung took the Hell Train route as regular.

According to Data Yu Han Sung's memories, his real self once stopped climbing the tower for a while and embarked on a long journey in the Hidden Floor just to find Khun Eduan, but in the end, his real self never met the so 'Great Warrior'. After the real Yu Han Sung decided to save his data and gave up his searching in the Hidden Floor, he then continued to climb up the tower. Even after the real Yu Han Sung left the Hidden Floor, his data version continued his own ambition and determination to find Khun Eduan. Yu Han Sung eventually found Eduan by pure luck at the Cold Land Hidden Stage where Eduan saved his life from the Big Breeder. However, Eduan simply saved Yu Han Sung out of pity and hate against the Big Breeder's interference in his territory, and he also considered Yu Han Sung as a lowly creature. But after seeing Yu Han Sung's determination and patience as he kept following him around, and also having received quantities of the grape flavored drink as a bribe, Eduan finally willing to listen to Yu Han Sung's request.[2]

It turns out that the reason why Yu Han Sung wanted to meet the Data of Khun Eduan was to inform Eduan that someday the Son of V, Twenty-Fifth Baam, would come to the Hidden Floor, defeat Data Zahard and liberate this hidden floor from his hands. Data Yu Han Sung also requested Eduan to help him on this matter. At first, Eduan was distrustful of Yu Han Sung and commented that what Yu Han Sung just said was likely a ridiculous story and utter nonsense. Despite getting such a response from Khun Eduan, Yu Han Sung continued his story, saying that Zahard on the outside has changed and ruthlessly ruling as King of the Tower. God will send someone to punish Zahard and he will cause a stir in this tower. This is a "fate" that has been tied together by "Arlen Grace". After hearing what Yu Han Sung said, Eduan still refused to believe that story and labeled it as nonsense. But, in the end, he decided to believe what he heard.[2]

The fight continued, but was quickly interrupted by the appearance of a giant soldier patrolling the quarantine area. Androssi teleported Han Sung and the rest of the group away using Bong Bong. Baam's nemesis was then tranquillised by Batis, a data human that Han Sung allied with.
1/3
Add photo

The group moved into the seed, a shelter within the quarantine area. Here, Han Sung explained that the group had to escape the Fruit of Good and Evil before the heroes outside cleared the stage, or else they would be trapped until another group of heroes arrived. He then explained that the people trapped within the fruit had already died several times trying to escape. The prisoners managed to find an exit, however, they were never able to get through the final door. Han Sung then said that Baam would be able to break through the door. To this, Baam said that they should leave immediately, as his teammates outside would be able to clear the first stage very quickly. Han Sung agreed, however at this moment, Baam's nemesis awakened and the giant soldier attacked the seed. After Baam defeated his nemesis, Han Sung revealed that he had planted bombs throughout the seed. The prisoners escaped the seed and Han Sung detonated the bombs. When Baam showed hesitation due to the 'death' of his nemesis, Han Sung explained that the Big Breeders, responsible for trapping the prisoners within the fruit, were the henchman of young data-Zahard and that they ensured nobody who arrived at the Hidden Floor could find him.

While progressing towards the exit, the fruit was shaken as the Big Breeder arrived to present the grand quest. Batis suggested that he, Han Sung, Baam and Androssi should take the shortcut and escape so that they could stop Big Breeder in time. Han Sung explained that there was a more dangerous path, but if they didn't hurry, everyone in the fruit would die. By making holes through the fruit's tunnels, Han Sung created a shortcut leading through the fruit's shelters and straight to the exit. After finally arriving at the exit, Baam successfully broke open the door. With this, and while looking at Baam, Han Sung mentally noted, "I knew it. This is the guy! V...". Having escaped the fruit, the group begins to move towards Big Breeder. However, the demon holding the fruit awakened and attacked the group. Realising that he needed to attack the main body, Baam asked Han Sung to amplify his Shinsu. Through a combination of Baam's attack and Han Sung's amplification, the demon was annihilated and the group managed to arrive at Big Breeder's location. Han Sung then told Baam to go through the door behind Big Breeder, as the real Big Breeder was hiding behind it.

Data Yu Han Sung appearance was not that different from his real self. But he was portrayed as a young man with long blonde hair, with a cheerful and optimistic personality. He was very friendly and helpful, willing to help others that are in need, even to the point of sacrificing himself. He is a good guy who expressed his feelings freely, he was very open and had a warm heart. He didn't like to do bad things things and never abandoned his friends.[3] He even has a best-friend named Batis, a generated Data Humans. He respected Data Eduan.

It's kinda the opposite of his real self which, more intimidating and mysterious. Even Androssi Zahard was confused and shocked after seeing the personality of the young version of him to the point of questioning something like "Did he used to be nice when he was younger..? What happen for him to be like that in the outside?"

The Data version of himself was also addicted to coffee, meaning that Yu Han Sung already liked coffee even when he was a regular. He was very adventurous and when he sees an interesting enemy, he would want fight them, as seen when he want to fight Baam's sworn enemy in the form of Viole. But, this is nothing new since back in part 1, he also showed the same passion against Lo Po Bia Ren. Apparently he also liked to troll and joke around ever since he was a regular as seen when Data Yu Han Sung teased Baam that both of them could make a great team together, despite knowing the fact that Bam hates him.[4]

Data Yu Han Sung was apparently also hiding a lot of secrets just like his real self. But his friendly personality, mysteriousness and the fact that he prepared grand event for Baam's arrival to the Hidden Floor has left a mark in the mind and heart of David Hockney, along with Sachi Faker and Boro. Hockney even said that he really wanted to meet the real Yu Han Sung in person. 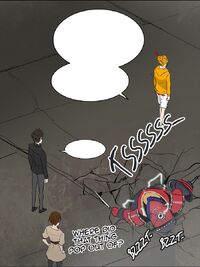 Data Yu Han Sung shows an amazingly perfect-aim in combat skill, followed with intelligence, perception, and immense understanding of his surroundings. He was able to track, sense, and pin-point the exact location of the enemy that was hidden inside the brick floor, attacking and striking it's fatal point to completely immobilize them. Something that even Baam and Androssi weren't aware of. He was also able to tell right away the reason why Baam and Androssi entered the Hidden Floor[1]. He was also able to percieve that his real self and Bam are in a pretty bad relationship just by analyzing Baam's treatment and attitude towards him. It means that he can perfectly adapt and assess the situation and give quick but accurate judgement.

Data Yu Han Sung can also block several traps with his Shinsu, protecting Bam and Androssi at the same time while both of them didn't even realize it. It means even when he was a regular, he was already a gifted and talented Wave Controller. Even as a regular, he already showed great talent in the special skills he would become known for in the future which are amplifying and binding.

As a Regular, Yu Han Sung have skills like:

Retrieved from "https://towerofgod.fandom.com/wiki/Yu_Han_Sung_(Data)?oldid=152595"
Community content is available under CC-BY-SA unless otherwise noted.