As Lero-Ro contemplates the cruelty of ‘God’ and leaves the aggressive Regular curled up on the ground, he returns to Baam as Leesoo and Serena Rinnen force their way through the barrier.

Their next examination is conducted team by team. While Baam’s team is waiting, his hopes that the blue ceiling is a sky is dashed by Koon. They are interrupted by the screams of another team. They are the fifth team to go and, before they go in, they are given a clue by Neonbag: that they have to finish the test within 5 minutes. As they enter the room, they are greeted by Yu Han Sung.

Koon has a flashback to when he was in the Koon Family, illustrating Koon’s upbringing and his intense mistrust towards anything. Back in the present, Yu Han Sung explains the rules for success and gives them no more clues, to the aggravation of Baam’s team. He uses the full force of his intellect and tries to think his way out of this test, but as he is thinking, Rak just opens a door. To Koon’s outrage, the goal of the test was to open any door. Because of his mistrust, he needed allies that could trust and take leaps of faith without any concrete proof.

The other teams all passed due to strange reasons. Leesoo was the only one who correctly used the clue given to him by Neonbag and deduced what was supposed to be done. One team relied on blind and false faith and Laure picked one randomly due to his laziness. 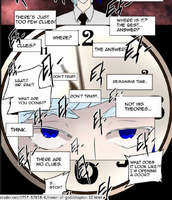 Koon trying to think his way through

Retrieved from "https://towerofgod.fandom.com/wiki/Yu_Han_Sung%27s_Examination?oldid=60148"
Community content is available under CC-BY-SA unless otherwise noted.