White (화이트, Hwaiteu) is the tenth Slayer of FUG,[5] one of the 2nd generation of Slayers and until the latter events of the Hell Train, only his name and soul remained while his body had been lost.[6] It was revealed during the Dallar Show that Hoaqin and his other siblings, in their combined form, was actually White.[7] White has recently resurrected after Hoaqin and his final clone finally recombined.

The five siblings that compose White were part of a family that were gifted in swordsmanship. However, no matter how much they trained, they couldn't become as beautifully powerful a swordsman as their father.[8] After the five siblings came to the same conclusion, Hoaqin suggested merging their powers to be able to overcome their father[8] by using a forbidden technique left by an ancient devil, "Spell of soul-eating" (a spell that allows many to become one by eating each other's souls).[7] After studying the spell, they succeeded in becoming one being, subsequently known as "White".

While he was a Slayer, White became the king of two lands in an area of the Outer Tower on a Floor of the Tower. After building each country up, he turned them against one another so that war and strife reigned endlessly throughout the lands; because of the wars, nearly a billion people died, all of whom were consumed and absorbed by White.[9][10]

His exploits and infamy made the Tower's citizens shake in fear. Among these, one of the most terrible rituals was carried out in a secretive location in the Tower, and it is said that over 60,000 lives were lost there. Eventually, he was subdued by a Zahard's Princess who could no longer tolerate these evils.[6][9][11]

One source claimed that he casted a spell that would make his soul immortal before he died and because this rumoured spell was said to activate only under certain conditions, many speculated that, based on his acts in life, he may have created a spell that could enable his own resurrection at the cost of countless souls.[6] Many followers attempted to discover the conditions required to activate the spell that would resurrect him, but none were successful. However, some say that the mass murder incidents occurring in the Tower's Middle Area may be associated with this.[6]

The truth is that after "the incident", White had to split into his composite souls again in the Hell Train but to do so they needed a lot of "sacrifices". However they failed and were sealed in an unstable condition inside the Hell Train.[8]

White's overall appearance is very similar to that of Hoaqin when he had absorbed three of his four siblings, with long flowing white hair, an effeminately handsome visage, a flowing robe with ornate red markings and trimmings and two long white wing-like extensions of shinsoo that trails behind him. His sword has transformed once more, being longer with a uniquely-shaped tip.

White, who had harboured an interest in sorcery and dangerous spells since ancient times, was especially interested in group rites and items that used sacrifices;[6] he was also notorious for playing around with human lives.[5] Due to his vicious personality, even a few followers of FUG preferred to avoid him. However, quite captivating is the saying that his usual self was quite the gentleman.[6] SIU notes that White seems to have a personality disorder.[12] 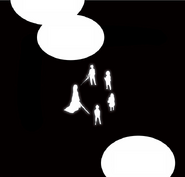 With Hoaqin having finally recombined with his clone to become one again, White was resurrected.

As the Hell Train neared the last station ready to arrive, the High Ranker Dorian Frog appeared and used her powers to the stop the train dead in its tracks. With the train stuck, White stepped out, taking the environment after being sealed for so long. Being accosted by two Rankers, White effortlessly killed them while simultaneously getting rid of the sticky substance that was preventing the train from moving. With Dorian Frog wondering who he was, White introduced himself as the 10th Slayer of FUG before stating that they were all now his prey.

Dorian summoned his shinheuh, Pollack, which sent White flying very easily. While floating, White was reminiscing about meeting his father, when he was corrected about meaning of his previous words and treading path of evil. White was called back by voice of clone in his head and reminded about his deal with Hwa Ryun to help Regulars getting to the Last Station from the hell Train. The 10th Slayer got back in action quickly and killed another Ranker from 2nd Division of 4th Army Corp, H-14. Then he attacked Dorian, using Incinerating Splash of the Dead. Pollack was summoned again, but this time White, wanting to give to his sword a proper swing, used one of his stronger techniques, Deathly Sword of Heavenly Spirits and then in quick succession the White Magnolia. He left Pollack wounded and killed another few Rankers from Zahard's Army. After this, White run out of power, and fell down, but was captured by Dorian Frog. Later, White was imprisoned in special prison made for High Rankers.

Evan Edrok was able to free both White and Karaka easily when the rankers that were guarding the prison were not present. White and Karaka, immediately went to assist Baam and blocked Ari Bright Sharon's attack before it hits Baam. White was hit from behind by Baam, asking how did he manage to get his powers back, and that he doesn't want help from a demon like White. White who was unharmed from the attack said he didn't want to help Baam as well, but he made a promise with someone. He called Baam the 'Ace' of this war, and it would hurt his pride as a slayer if Baam died.

White is seen fighting with Sharon whom he called a coward because of her family's history of avoiding wars and desiring peace. The sudden appearance of Kallavan caught White's attention and everybody as well. Afterwards, when Evankhell, Karaka, and Yuri was trying to stop Kallavan, White who is having his own battle was confronted by many rankers of the army, which he then used one of his special attack, Incinerating Shooting Star, which was strong enough for Sharon to yell at the army to watch out. The attack was blocked by Elpathion quite easily, whom White did not expect to come. Afterwards, the clone yelled at White calling him an idiot because he used up all his power again. Elpathion attempts to capture White again but he was teleported away by Enna Cores which belonged to Evan Edrok. White was surprised to see the guide and was told to be quiet as they were escaping.

White, along with Evankhell and Karaka went to meet Madoraco to make a deal with him to get reinforcement against Kallavan's army.

White was seen sleeping when the Elder, Khel Hellam and his guide arrived. Later when two rankers who works for Madoraco came inside his room, White who just woke up, told them, if they cross the line marked on the ground, he'll attack them. Both rankers then blindly charge into White, thinking he is a mere regular, is then easily defeated and consumed by White.

Before losing his power and reverting to his five composite souls, White was a Slayer of FUG, indicating a fearsome level of power and strength. White was also an avid sorcerer, utilising dangerous rituals and spells to attain power. When he was still active, he used countless lives as sacrifices in grand incantations.[6]

The appearance of his "final clone" revealed his power to be "higher than a Ranker's", as indicated by Evan Edrok,[11] suggesting that White's power could have been revered as something akin to a High Ranker's.

After being resurrected into a single entity again, White received his power back enabling him to effortlessly kill two Rankers instantly with a single attack.[4] However, according to SIU, White still has a long way to go before being considered as being in a "completed state".[12] It is implied that at his peak, White's power can rival a Zahard Army Corp Commander such as Kallavan [13]

White Style: Spirit Sword (화이트류 원령검, Hwaiteu-lyu Wonlyeong-geom): Being a FUG Slayer from the Arie Family, he developed his own style based on his knowledge of the Arie Swordsmanship.

Retrieved from "https://towerofgod.fandom.com/wiki/White?oldid=120589"
Community content is available under CC-BY-SA unless otherwise noted.