Tower of God Wiki
Register
Don't have an account?
Sign In
Advertisement
in: Pages with reference errors, Characters, Zahard's Army,
and 6 more
English

Weye (와이, Wai) is a Ranker and a subordinate of Khul Nissam Kay.[1]

Weye and Jay joined the Zahard's Army together with Khul Nissam Kay. Kay's mother asked them to look after her son.

He wears a helmet covering his entire head and a white bodysuit.

Weye seems to be loyal to the Nissam Family and he really cares about Khul Nissam Kay.

As noted by Evankhell, Weye, much like Jay and their master Kay, is far too inexperienced and foolish for their respective ranks in the 4th Army. This is seen where he foolishly rushed into battle against Evankhell despite it being glaringly obvious how outmatched he was in comparison to her and allowing his arrogance and emotions to guid his actions which ultimately lead to his death. 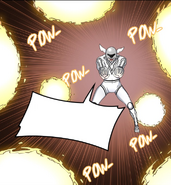 Weye was in one of the warships of 1st division joining 2nd division of 4th army corp at the Last Station.

After Karaka's minions attacked forces of Zahard's Army at the Last Station, Weye followed Khul Nissam Kay into battle. When Kay was sent flying away by Evankhell, Weye and Jay attacked the High Ranker with hatred in the eyes for what she did to their superior. After Jay got quickly beaten to death, Weye prepared baangs to attack Evankhell, but when she used her Orb technique Inferno, Shinsu from his baangs was sucked by the Orb. Soon after Weye's body started to melt, because of the heat from Evankhell's Orb.

He was shown to be capable of using 10 baangs.Cite error: The opening <ref> tag is malformed or has a bad name