Tower of God Wiki
Register
Don't have an account?
Sign In
Advertisement
in: Characters, Rankers, Zahard's Army,
and 3 more
English

His body is composed of green slime. 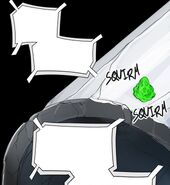 Water Jelly is part of the Advance Team of the 4th corp of Zahard's army sent to the Last Station to carry out one of the Zahard's Orders. Water Jelly and other Rankers of Zahard's Army went to assist Dorian Frog by stopping the train from entering the last station.

Water Jelly was strong enough to stop the Hell Train from accelerating, preventing it from entering the last station.