Twenty-Fifth Baam
Wide Range Shinsu Control Skill:Water Dragon-Heavy Storm (광역형 신수제어술: 수룡-폭우) is a technique of Twenty-Fifth Baam that combines his Water Dragon technique and Rainfall technique. Baam will gather Shinsu around him, and pours it down on the enemy, making it seem like rain. Even without the usage of the Black March and Thorn, he was able to overwhelm a canine Ranker named R with this technique, albeit briefly. Even the Ranker whom he was using the technique against commented on whether this was really the technique level of a Regular, implying that Baam is Ranker level, or at least around that level.[1] 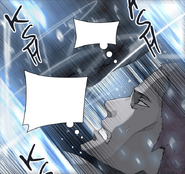 Retrieved from "https://towerofgod.fandom.com/wiki/Water_Dragon_-_Heavy_Storm?oldid=138927"
Community content is available under CC-BY-SA unless otherwise noted.