Vol.2 Chapter 87
Waiting Area (대기장소, Daegijangso) is an area of the Water Stadium, which was used to host the winners of the quarterfinals and the semifinals in-between rounds of the Development Tournament.[1]

While the other contestants were resting Khun is viewing recordings of the tournaments in the theatre, when he is approached by Miya who reveals that 3 of the gamblers were planted by FUG, one of them being her. Miya explains that the FUG plants are there to hunt Baam and his friends.[2] Ship Leesoo enters the Theatre discovering Khun, while Hatsu sneaks up on Khun with a Rifle. Khun, Ship Leeso, and Hatsu while in the theatre share information about the situation and the danger Baam is in.

Yihwa runs out of one of the bedrooms screaming, having been scared by Vespa going to Akraptor and Wangnan for help. Akraptor and Wangnan enter the bedroom with a fly swatter to deal with it. Before any damage is done Khun and Hatsu arrive and explain the situation to the other regulars inside Vespa's room. In the bathroom, Khun washes out the hair dye in the sink with Ship leeso sitting on a bench outside the door. Khun gathers the regulars inside the theatre to explain his plan and leave to enter the next round of the tournament.[3] 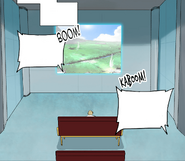 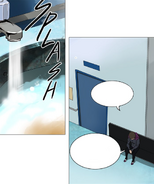 Bathroom with Ship Leeso sitting outside