52F - Gakjadosaeng (5): This is the seventy-fourth chapter of Volume 3 of Tower of God. 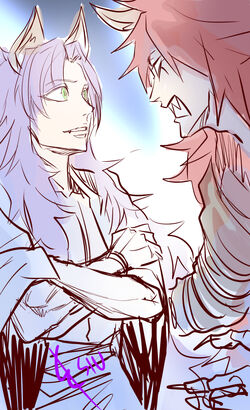 I'm back with the afterwords that aren't afterwards ^^; It just doesn't feel like I'm done with the week without it, so I've been just writing just a little, not too much.

On Yasratcha and Yama... I actually don't have dogs or cats, so I don't know too well about either of those creatures nor do I favor one over the other. So whoever wins here, I don't have a particular preference...

Actually, I am a bit shy with both people and animals. A long long time ago I watched a puppy for a week at my house, but I don't have any memories of even really touching them. I thought it would get better with age but it hasn't. It's not that I dislike people/animals, but beginnings are the hardest ^^;

Anyway, when I was drawing them, I didn't have anything solidly set because one's a dog and the other's a cat, but as for Yasratcha, while his personality is that of a cat, I did imagine his specs being more that of a feline predator than that of a housecat. I guess it's because Yasratcha's such a strong character. Now that I think of it, Yama feels less so a dog you would see in a house but more like a bear-sized dog (...). He kinda acts like one too.

I will see you next week

Have a happy and healthy week ^^