52F - Gakjadosaeng (1): This is the seventienth chapter of Volume 3 of Tower of God. 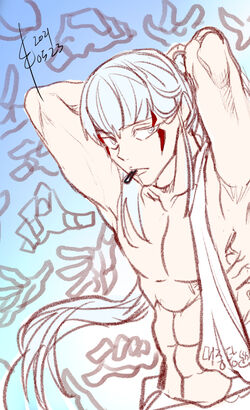 Today's drawing is White tying up his hair as he goes into the bath...

Despite the weather heating up these days, White is always bundled up, so I stripped him down a little.

Actually, this is all part of my scheme to strip a male character this time and put a female character in a swimsuit next chapter (...)

Hehe My afterwords doodle is for practice, so I try to put them in more revealing clothes... or try different style of clothing on them.

Not that I am exuding free time right now either...

Actually, one of the reasons why it's difficult to write up afterwords these days

is actually the preview chapters... I get confused on what the content is for the newest chapter haha.​

Even if I get feedback, it's hard to edit preview already made preview chapters,

so it all kinda lost meaning too. So there's that matter as well...​

In this chapter, we have the characters in the Field, starting their game split up in multiple branches,

and the games in the Cat Tower, right? heh

There is a lot of content in the Preview chapters... and that's how it's going to be for the next few chapters.

I'll probably need to dial it back at some point reasonably...

But since there's so many characters and there's so much story I want to cover quickly in a hurry,

I wanted to come back with plenty of content.

The most important thing is fun, after all. It's not easy...

In regards to White's sword...

Well, like all swords of the Arie Family, there is the matter of it being uncatchable due to unpredictibilty, as well as due to strength.

As I said it literally in the release, it may be a pre-defined Laws of the Tower ​that exists beyond the Laws of Physics. (say wha?)

The Tower of God in a sense is a world where a game-like system is blended into a real world,

Blog - based Afterwords may be going away soon as early as next week...

Currently, I've been posting on Twitter simple comments and doodles, but I may move that over to Instagram in due time.

A lot of my readers use instagram after all.

I made a new account, but I have no idea what I'm doing, so​ once i get the hang of it, I'll make simple comments and post doodles every week.

I've posted my afterwords on the blog weekly for the last 10 years outside of a few exceptions,

but as the times change and the platform closest to you guys my readers change as well, I end up changing as well​.

There's the matter of the blog being limited in the things I want to do,

the afterwords as a long text post starting to lose meaning slowly, as well as it creating a negative impact sometimes.

I think social medial would hopefully reduce some of those concerns weighing me down.

Well, I usually am not even on social media outside of upload timeframe... hehe

I will still make my important posts and announcements on my blog.

I will let you know about my social media accounts as I open them up.

I hope you guys are happy and have a good week.​

I will work hard this week and see you in the next one.

See you next week, thank you ^^