The Second Defensive Wall (3): This is the sixty-ninth chapter of Volume 3 of Tower of God. 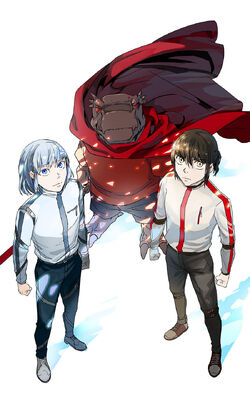 Hello everyone, it's been a while.

A little bit earlier than expected, Tower of God has come back.

Actually, I was thinking I would start working around the end of June to come back after.

But to tell you to truth, while my body hasn't fully recovered like I wanted it to, but as I was getting examined in various fields and finding more problems, I realized that full recovery may be much further away and much more unrealistic .

If this would be a problem while I continued Tower of God anyway, and if it was going to be impossible to fully recover from, I thought it would be better to start getting ready for my come back sooner... hh

It's weird, I know. Neither those around me or myself quite understand how that conclusion came to be, but anyway, I came back earlier than anticipated.

Some of the chapters I had made earlier were too old so I redrew those, and there were also a few things I had to get ready for the come back, on top of starting work on the hard copies again, and on top of that, since the preview quota increased from 3 to 4 chapters, so I had to account for those as well. As such, everything had been very chaotic since April or so.

Now you may be thinking why I'm whining out of the blue coming right out of a year long hiatus, but this blog's entire point has always been me complaining and lamenting things that I can't on the main webtoon (since wen...)

Actually, setting aside all those personal problems, when you are an artist on hiatus, you will always have a sense of being pent up in your heart, but when you start uploading, you also get difficulties in doing so. It's difficult. As everything is changing around us in these times, I only have the uttermost respect for my many peers, seniors, and juniors who draw webtoons.

Although I prepared a lot of different things, reducing down time and trying to come back as soon as possible, I feel so apologetic for you guys that's been waiting for such a long time. You may like the fruits of my efforts or may not. It may be no longer the same as it has been 10 years ago, and sometimes rather than going for the best I can I just want to draw a comic, but as an artist, I just want to you guys to enjoy it after a long wait. That's what I think. Well, I can only be so greedy. But having you guys enjoy my work... the life of an artist can be so difficult sometimes.

Anyway, I made another long post after a comeback. hahaha.

From now on, there may be a large change I may not make blog posts after every chapter. I may simply make comments or just post on my other social media accounts. It's unfortunately, but due to multiple circumstances at play I think it's best that I reduce the channels I'm active on and focus on my work. I'll let you know about that as I decide. ^

Well then... I kept you guys waiting for a long time, but I dare ask you guys to enjoy my work once more as I close this post. Have a good night, and I'll see you with the next week's chapter.

For my readers, love you, stay healthy, and thank you _ _