VS. Kallavan (4):  This is the sixty third chapter of Volume 3 of Tower of God.

Through Pocket, a soldier informs Yama about the Enemies' Flagship secretly getting closer to The Cage. Yama then orders their Fighter Ships to block the Flagship from getting nearer.

Meanwhile, Kallavan and White's battle continues. Both of them are able to block each others attack. Bam notices that White is purposefully trying to show him how to burn souls. While observing the fight of the two, Karaka contacts Bam through his pocket and tells him to use that opportunity to break the spell of the The Nest's wall. Bam agrees but before he heads to the wall, Hwaryun calls him and tells how the situation has changed near The Cage.

Several characters are shown to be shocked hearing the update about the situation near The Cage. Dowon tries to approach the ships to prevent them from crashing, but a message from Luch stops her from going further. It tells her to get away as far as possible as the Flagship is going to explode soon. Yama tries to attack the floating ship but his soldier informs him that attacking it will only make the situation worse as it may create a large explosion. Hearing his soldier's advice, he then decides to abandon The Cage and evacuate everyone inside.

Meanwhile, Luch has just arrived at the engine room of the Flagship. He asks Lyborick to keep his promise not to kill his friends if he helps exploding the ship as according to the plan with which Lyborick agrees. Luch then summons his weapon and starts destroying things inside the engine room with his electricity power.

The Flagship is now so close to The Cage that it basically grips it and cause destruction in some parts of The Cage. The soldiers of the 4th Army Corp tries to come closer but Kallavan tells them not to do that, just stay calm, and get away from The Cage. However, before he could end his words, White attacks him and they continue their fight once again. Getting impatient, White decides to attack him with a fatal technique. It ends up destroying Kallavan's right arm although he then make a new one with his Essence of Bravery power.

In the other side of the battlefield, Bam hesitates about whether to combine his teleportation skill with the power of the souls to save the people in The Cage. He then makes up his mind and will accept any responsibility of his decision to combine those powers. The chapter ends with Bam burning the souls and now appears with white, soul-made wings in his back. 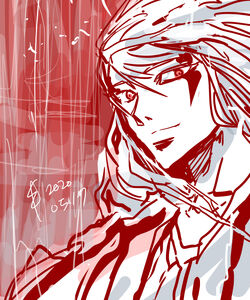 This week's doodle is White. Since I drew him pretty roughly, he looks a bit loose, kinda like he's covered in blood. ​

My body is still it's usual today, so the afterword will be short. Personally, White's changed since when I first wrote him out. Originally lorewise, White was supposed to look normal but be a psycho on the inside. But as I put him to the drafts, we had young Hoaqin show up, so I gave him a childish narcissistic personality to him, and as a result, he's a psycho both on the inside and the outside. Considering how the Arie family is so restrictive, I thought it would make sense for someone that abandoned the family to have this kinda personality, so I was enjoying it... As he regains his power, he's becoming more reconciled with the original lore I had for him. He's evil but definitely charming.

Since his first post-full-revival fight is against Kallavan, it may be difficult to see how much stronger he's become, but Kallavan is an Army Corps Commander-tier fighter with a colorful resume, so they're both fantastically powerful.

​Baam seems to be up to something, wonder what...

These days, I have a lot going on in my mind. It's like a whole bunch of worries I had for a long time are coming up to the surface slowly. I couldn't say I was perfectly happy, but I thought I was getting close. But at times, I feel I'm getting further away, which can discourage me. I'm getting old, although I haven't reached my midlife crisis yet hehehe. Even if you worry a lot, it doesn't actually do you much good.

​I hope you guys, my readers don't have any worries and stay happy and healthy this week. I should work hard to help you all with that, but... that's a pretty big task.

​Then I'll be back next week with White and Kallavan fighting, and Baam planning something.

Retrieved from "https://towerofgod.fandom.com/wiki/Vol.3_Ch.63:_52F_-_VS._Kallavan_(4)?oldid=140494"
Community content is available under CC-BY-SA unless otherwise noted.