A Rough War (2):  This is the fifty-seventh chapter of Volume 3 of Tower of God.

After Kallavan appears at Baam's location, Dowon also states that she'll get in their way. She informs Cha that their comrades are hostages and will be executed if they don't surrender. Baam contemplates his options between staying put or risking his life to destroy the wall.

In another space of the battlefield, Karaka continues his fight with Ha Cheonhee, but is soon inform about Kallavan's arrival via pocket. He uses his Karaka Style: World of Darkness to obstruct Cheonhee's advance. Angered, Cheonhee strike one of the bubbles and gets absorbed.

Evankhell receives the news as well and immediately heads towards Baam's location. Within the wreckage, the sniper spear bearer Lefav was about to line up her shot but Evankhell began to move. Lefav requests Elpathion's help to slow her down, which he complies.

Karaka arrives and attempts to strike Kallavan from behind but his Steel Tree gets blown away by Kallavan. Karaka coordinates an attack with Baam and orders him to keep a distance so he can et a chance to reach the wall. Kallavan wonders if he's destined to fight Jinsung's pupil and apologizes in advance for their possible deaths.

Elpathion intercepts Evankhell and uses his lighthouses to trap Evankhell. Evankhell quickly breaks out and fatally strikes. Before his death, he apologizes to Kallavan and at that moment, Lefav pulls the triggers and shot Evankhell in the head. 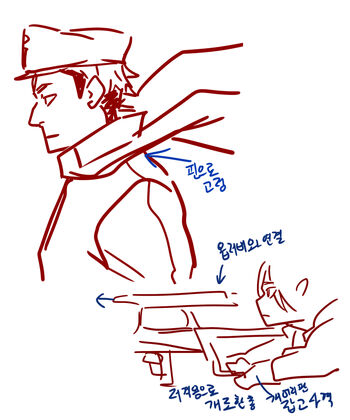 Hello, this is SIU. This week's afterword doodle is a couple of diagrams on the recent characters with explanations. Nothing too important, but thought you guys might be curious.

In Kallavan's case, He uses two coats to hide is bound arm. As it says in the picture, "The coat is attached by a pin" to the shoulder so that it won't come off, but if the battle gets going, it really should fall off haha. But it's hard to draw, and with his arm tied down, this looks visually better, so I just like to think of it as a super duper powerful clip when I draw him.

On Lepavuv, her rifle is "modified for sniping" but it isn't just a sniper rifle. Lorewise, if she swaps out the buttstock and the barrel, she can use it for assault. Since the gun was built to be super long, her firing position looks weird, because it ends up so that "she fires while holding on to the buttstock" . "The scope is connected to an Observer": This is not because she's a Scout, but it's an assist item that helps with sniping.

This week's content... I did get some feedback during the previews, and it was difficult to not talk about it, but as you'll see next week, Lepavuv is not a High Ranker that threatens the current balance. Actually, her ability has a lot of conditions that considering her rank. It's like going into an FPS and giving the sniper just two shots in the match. It's like that. Despite her rank, she can't be like Evankhell and utterly dominate the battlefield like Lu Bu (TN: Romance of the Three Kingdoms reference). Somehow this chapter became a very cliff-hangery chapter ^^; as this battle continues next week, please stay tuned.

Last Wednesday we had the first premier of the anime. I hope you enjoyed seeing my kids animated. As an author, the most important thing for me is that all of you enjoy the work. I just hope that this animation will be a great fun gift for all of my dear readers and now watchers too.

Actually, these days a lot of those around me are having trouble with the Corona-virus. I'm normally used to staying home all day, but even I'm starting to get cabin fever too hehe. I hope the day comes when everyone can be outside without worrying about their health like normal one day.

Personally, my laryngitis has been improving, perhaps thanks to the weather, but my wrist has worsened, so I worry and I'm trying to take care of myself too.​

I hope you all have a happy and healthy week once again, don't miss the animation premiering this Wednesday, and I will be back next week with the fighters in the Nest.​

Stay happy and healthy, see you next week!