The Intrusion (1):  This is the fifty-third chapter of Volume 3 of Tower of God. It follows the start of the battle at The Nest, with The Cage being transported into the middle of the fight and Cha meeting up with Baam. 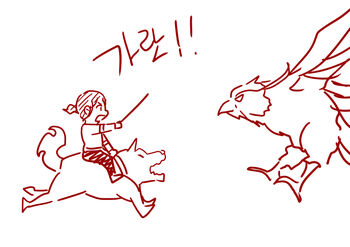 Hello, this is SIU. Today I drew Viole riding a big dog. Actually, I wanted to show a panel from one of the 4 panel extras from the next physical release, but it's not ready yet, so I'll try next week. It's not much so don't get yourself too worried up over it hehe..

This week, we continue the story in front of the Tower. Karaka and Evankhell is fighting hard, but the Cage seem to be unable to come in.

By the way, the 4th Army Corps was able to get in because when receiving allies, the 1st walls move to the side to the four directions, widening the gap. I thought about adding it into the release, but I thought it was TMI, and I thought it was visually apparent, so I cut that.

Anyway, while the Cage is stuck in front the first walls, we see Kel Hellam. He's got maxed stats but useless against Zahard's Army... He lets the Cage through the first wall with a flashback. Actually, I had to be very careful about how I layed this scene out, because it wasn't just someone teleporting but a masdive Cage. Like the walls from last time, it took a lot of hands and needed full cooperation with my assistants, so it took a lot of work. The scene went through many hands, so i hope it came out well.

Thanks to Kel Hellam the Cage makes it within the 1st Wall, and just as we are about to start the main battle, we see a Lo Po Bia Branch Head show up with a giant bird at the end. Looks like we're gonna see them fight next week.

And we have a giant bird, and I was asked why we don't have a giant dog for the Houndborn... By someone. Well... It's hard to draw (...) and if Yama rode one it would look like he's some primative bushman, and if you give dogs to people that aren't Anima normally, it's be just a dog that's chilling with Yama hehe. Actually it would be pretty cool if Mr. Kang Hyeong-wuk came out and tried to train the Houndborn. I mean sure, he'd die at a touch, but he is the president of dogs, so perhaps he can be Anima of Dogs too.

Hehe enough with the weird talk. I hope you guys look forward to the continued battle in the Nest, and how they fare against a Branch Family Head and his giant bird ^^

I always fall short of expectations, but when in an arc like this where I have to constantly bring out something from my imagination, I encounter a lot of obstacles beyond what I expect. I wish I could do better. If you guys enjoy reading and cheer me on to improve on my shortfalls, I would be very grateful.

On the Disease of the Week: I stop coughing when I take the medication, but when I stop it comes back. It's hard to fix chronic coughing. Entire, please take care of yourself while you're healthy. Thankfully my symptoms are not corona related.

Anyway, although the nation is caught up with troubles this season, I hope everyone has a happy and healthy week. I will come back next week with Yama and Baam, fighting hard in a hectic battlefield

See you healthy next week![1]