The Nest (4):  This is the fifty-second chapter of Volume 3 of Tower of God. It follows the build up to the battle of The Nest, with Baam fighting against Charlie. 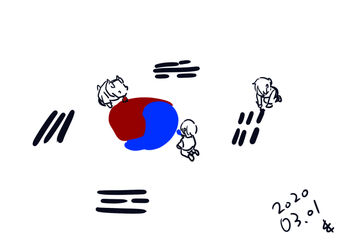 Today is March 1st, so RaKhunBaam gets to draw the Korean National Flag (TN: Context). Surprisingly, each one of them has their colors in the flag. It's a coincidence, and I'm in shook.... well not quite, but it does remind me of those who protected our nation, especially when our nation is going through hard times. Patriotism is not something that is easy to display in times of crisis. I think it's because of those who did manage the herculean feat that our nation is where it is today.

This chapter will be summarized briefly. Baam arrives at the battlefield, and we see a familiar face. Mr. Charlie, not sure if you know him (...) back at the Last Station, people kept calling him by his job title, so people may not remember his name (Well, there weren't exactly any flags set for his return). This guy is actually a quite elite Ranker compared to the Test Ranker. He's like a guy that passes the Civil Service exam in his 20's. It's hard for me to say because I don't know too much about how the Civil Service Exam works and the Tower is much larger than Korea, so a 1 to 1 comparison is not really feasible. There are so many rankers across multiple fields, there's a lot of gaps in the myriad of skills between them.

Anyway, Elite Ranker Charlie vs Baam. Despite being against a Ranker, he fends him off expertly, which surprises the military. It's like seeing a kid genius from a TV show. It's scary to see such unbelievable talent. Hwaryeon's great at making Baam's image in that regard.

And while the vision is turned away, Evankhell and Karaka launch a surprise assault on Zahard's Army, and the Cage following them. Yama declares the battle started at the battlefield before the chapter ends. The ship was renovated a bit, and you'll see why later.

These days, since we have a lot of ships, so we're doing a lot of 3D work, and I must thank my 3D designer and helpers who do their best to reflect the initial design. They fill in a lot of my gaps I have and lets me continue the webtoon. Anyway, This battle will make many suffer, in and out of canon haha. Due to the topic, the scale has grown bigger, but the story itself I'll try to keep simple. I think we will mostly keep looking at battles of important characters and the backgrounds.

Each wall will have a different type of battle, but it seems that in the initial phase, we'll have a war of attrition, haha.

And as for the disease of today... It seems that my illness that wasn't going away despite the Pharyngitis medication is getting better finally after taking some meds for esophagitis. Not by much, but at least there's a reaction, so there's hope qq. I'm trying my best to not cough too much and taking care of it.

The physical release proceeds came in last month, so I donated 1 million Korean wons (TN: <10k USD) to the people of Daegu, who are suffering from COV19. Additional funds were donated to other regions as well. Thanks to all of you who bought the books I was able to do something meaningful like this. I bow in thanks _ _ (I'm working on and off on the next book, sorry to keep you all waiting for so long)

Although the times are touch these days, I hope all of you have a happy and healthy week, stay clean, please keep your masks on. I will be back next week with Baam and the dogs of war. Stay healthy and happy. Thank you, see you next week! _ ^ ^