The Nest (3):  This is the fifty-first chapter of Volume 3 of Tower of God. The result of the fight between Baam and the ranker Pan is shown and both sides getting ready for war at The Nest, with Baam reaching The Nest at the end.

Unlike in my imagination, it is difficult to draw. haha... 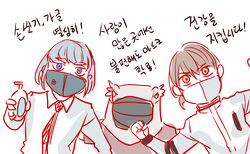 Rak: Use your mask in crowded places, even if uncomfortable!

Hello, this is SIU. Today's doodle is like a campaign poster^^; Since the whole nation is in a state of emergency over the Corona virus, I drew this while worrying about my dear readers. We're seeing that it spread to a lot of people and people have already passed away, which is heartbreaking, but I hope that all of you guys take care of yourselves and stay healthy. Having a healthy body is the best!

This week, we have the fight between Baam and the Test Ranker ending. We had a lot of Rankers being shown lately so you may not feel the full impact, but it is huge in the Tower of God world that a Regular beat a Ranker. The moment that happens, you are essentially proving that you are of another world.

Well, probably from Baam's bravery, we're seeing preparations for battle happening. A lot of content got packed in there, I hope you guys enjoyed that. All that happened and now we have Baam and Hwaryun at the gates.

The walls around The Nest are really really huge... Actually, it's really hard to draw something that fits your initial vision. Since we're working on a weekly release, and we're working very quickly, whenever I'm thinking up of these grand scale scenes, I think to myself "I kinda wanna draw it like this, I'm sure it will all work out haha", then cry tears of blood, and that happens every time (and these days, my assistants cry with me...) I often pray that we can end this arc without collapse from overexertion hehe. Well, every work has different values or direction they go after, but right now, drawing out the lore from my imagination may be difficult but it is my job that I ultimately enjoy, and I do hope that I can maintain that for Tower of God.

Anyway, this battle is at a Army Corps-level battle, so the concept is set around the massive battlefield. The great walls that Baam and Hwaryun face, Zahard's Armies and those who oppose them. I hope you look forward to the battle that is to come.

Today's illness... my ​Pharyngitis​ (that is what it apparently is called) is still not going awa, hahaha. I looked it up, and I hear many saying it's normal for it to last this long, and I'm worried about going to the hospital right now, so I've been staving it off for a while now, but even while it's getting better, it comes back whenever I get even a bit stressed qq. If it doesn't go away this week though, I think I'll have to go get seen again.

Well then everyone, like I said earlier, health is the first, second, and third most important thing, so please take good care of it (not that I'm the one to talk), have a happy healthy week, and I will be back next week with Baam, who looks like he's going to fight a war in space. Stay healthy, I will see you next week!

PS: To all of you self-employed people of Korea, things look tough right now, but stay strong!