The nest (1):  This is the forty-ninth chapter of Volume 3 of Tower of God. It shows the end of the fight on Baylord Yama side when Lo Po Bia Yasratcha kills most of the Canine.

At the wall with Baylord Yama, the battlefield reacts to the appearance of the rebel war hero, with Zahard's Army spreading out to minimize casualties and FUG recognizing that he is on their side. Lo Po Bia Haratcha aggressively goes after Yu Han Sung while calling him a mouse, Kendrick Diel is nimbly dodgingKaraka's attacks, and Lo Po Bia Ha Satcha is looking down on Baylord Paul from her ghost clouds. Lo Po Bia Yasratcha thinks to himself that he did not expect an all-out battle like this, thinking that the mission is to just capture one of the heroes anyway. He also expected Cha to just charge at him, but Cha keeps back and attacks from a distance, which makes it harder for Yasratcha to capture him.

However, suddenly Yasratcha gets the order from HQ to abandon the operation and retreat immediately, this catches Yasratcha off-guard as he is nowhere done with his mission. Yasratcha wonders what he is supposed to do with Baylord Yama, as he would like to deal with him here and now. However, Yasratcha decides to scare him by showing off his power by forcing Canzon to commit suicide and get the Canine People to start murdering each other. Yama is infuriated with Yasratcha, but Evankhell stops him from charging after him, since Yasratcha had no intentions of letting the canines go anyway.

Inside the cage, Varagarv and Ron Mei are wondering what is happening as the canines around them are killing each other. Yasratcha decides to take the other high ranking members with him as hostages, with Tall, Jordan, and Berdych being among them. Yama condemns Yasratcha as a coward for taking his subordinates hostages, before Yasratcha announces his retreat to the other division commanders. As Yasratcha and the 5th Army Corp leaves, Yama wrestles out of Evankhell's grip and tries to catch Yasratcha, but he does not reach him. Before Yasratcha leaves, he gives a warning to Yama that he should remember what happened here and for his own good he should be a good boy and stay in his cage. We are shown many dead canines around the cage and Yama yells after Yasratcha in a fit of rage.

The next day, Khun Aguero Agnis relays the information about the battle at the other wall to Twenty-Fifth Baam and Rak Wraithraiser. Khun tells Baam that most canines are dead and that Yasratcha captured the rest of the canine leaders. Khun continues by saying it seemed Zahard knew they were coming and it will most likely take some time for The Cage and Yama to recover.

In The Nest, Khun Maschenny Zahard is getting updated on the situation of the mission to the Wall of Peaceful Coexistence with an unknown person over the Pocket. Maschenny starts to monologue about The Nest, where she explains that it built around a giant rock of Suspendium called the 'Frozen Waterfall'. The rock of suspendium is so powerful it makes everything around it float as well, making it difficult for even High Rankers to travers without special gear. The Lo Po Bia Family Head has been using its power to make a massive fortress float, which he uses as his base.

At one point he also got The Workshop to make him a device to transport things inside the giant rock of suspendium. After a long period, they manage to make a device called 'Light which makes the waterfall flow'. It takes a year of preheating to work and allows the Family Head to store things inside the suspedium rock, which he did due to its special properties. Inside the rock time stands still, so eggs don't hatch and people don't age, which makes it perfect for storing the eggs oif his favorite creatures. However, all the eggs are hatched, so the Family Head had no need for it anymore, so Zahard asked him if he could use it as a storeroom, which he was allowed to.

Inside there might be countless treasure, but it will also be used to store Ha Jinsung, as he is from the Ha Family and might be a good bargaining chip. However, Maschenny believes this to be an excuse, as HQ's real reason is that Baam will find out about and try and rescue his master. Hoping that Baam and his companions will enter the trap and be eliminated once and for all. Maschenny wonders if they will come at all and how big of a wave they are going to make, as the bigger the wave, the more fun it is to destroy it.

The Light Which Makes The Waterfall Flow 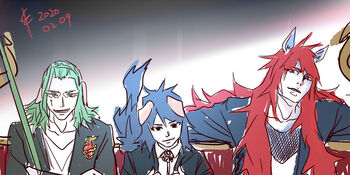 The original is actually quite big, but it's not taking the full size...

The doodle this week, like I said it would be last week, are the three Baylord Brothers. An assistant of mine who has been helping me out for more than a year now finally had to step down for personal reasons, and made their last request a doodle of the Baylord Brothers, so I drew one up for them. They worked hard helping out, and I only hope good things are ahead of them. Since I took so much time on a doodle for once, I also have a lot of work to do huhu. I'll finish writing up the afterwords and get back to work.

Ultimately, the battle at the Walls by the Cage ends like this. Well, this battle is not necessarily the beginning but more of a lead into the next battle, so it ended up dragging on more than anticipated. I mean, there are two whole walls. Since a lot of stories were going on at the same time, so things may have gotten confusing, but thank you to those who managed to keep up.

Kel Hellam is about as useful as a corpse in this battle haha. Is he really the one that faced off Evankhell and Yama last time? Actually, if Kel Hellam was able to actually do anything, Yasratcia and the 5th Corps/Army would be at a disadvantage. However, The Great and Mighty King Zahard decided that won't do and hits Kel Hellam with a balance patch. I mean, let's all forget about the fact that Zahard broke the balance to begin with... The MVP of this battle is not Yasracia or the Catborn, but Zahard himself.

Zon's death was planned from the start, but I think a lot of you who have been loving the Houndborn seem to be upset that both Zon and Gado died. This story is in part a story of Yama's growth, so I hope you look forward to how Yama rallies the survivors after his second and third in command died. I don't like killing characters, but the genre is the genre, so I have to do it often ㅠ

Ultimately, since there were a lot of unseen variables suddenly come into play in a manner disadvantageous to Evankhell and Yama, it's hard to say who won between Yama and Yasracia, or the Cage against the 5th Army. Actually, having the entirety of the Houndborn suddenly get mind controlled was such a huge liability. Perhaps the coming battles will help determine who would have won.

As an author, I have a feeling the Nest Arc will become rather too big of a scale for a weekly release work, so I am quite worried. Sometimes I want to find an excuse and take a break but haha. I will try my best.

And as many of you may already know, but the Tower of God Animation has been anounced. Actually, I didn't know that they were really gonna do it until they announced it haha. I did have a few meetings and heard the progress reports every once in a while, but it seemed like it felt so far away.... Getting an anime for a webtoon doesn't happen often like it getting a TV Series or a Movie... There's almost no cases where it actually worked out. Actually, I don't have too many expectations, I am just happy I get to see RaKhunBaam live hehe. 10 years of working on one work, and you suddenly get a whole anime.

Now that I've given you good news, I will go back to working ^^. Also, on the weekly illness report, I'm starting to have doubts this is a throat cold. I'm going to see get seen by internal medicine instead of the ENT.

Now, I, having increased in value thanks to a whole anime being produced (LIES), will come back next week with Yama, who has lost many Houndborn, and Baam. How will Yama and Baam forge through? Stay tuned. I hope you all stay healthy and have a good week. See you next time!

On the anime production: This anime was picked among a variety of webtoons by investors overseas, made a contract for the copyright, and being produced (may not be exact). I thought it would be aired outside of Korea first, but apparently, it's going to be simultaneously released in US Korea and Japan. They told me it would be overseas first... haha.... At least I hope this anime project gets a good reaction, so that other webtoons get animes as well. I hope that day comes. So please don't look at is as just a Tower of God thing, but as a part of the direction the entire webtoon world is heading, and I hope you support the animated release and get excited for it. Me, the ever so pitiful getting this opportunity is all thanks to you. Thank you _ _ I hope only good things come from now on.