Dowon (4):  This is the forty-eighth chapter of Volume 3 of Tower of God. It shows Dowon accepting Kallavan offer in exchange for not hurting Khane and letting Baam go.

Yool tells Dowon that Baam is the boy from the Outside who will bring chaos to the tower. Even Yool was shocked by this, much to the dismay of David Hockney and Lo Po Bia Elaine. After hearing this, Dowon becomes conflicted about her next course of action.

White and Kallavan are bolting towards their location. Dowon blocks Kallavan's attack and asks him to cease his attack. Baam's team and Daleet are watching from below. After reviewing Khane's memories, Dowon agrees to help Kallavan under the condition that he ceases his attack on Baam and the others. She states that she'll fight him if he fails to comply. After weighing his options, Kallavan agrees to her terms. The others are in disbelief after seeing Dowon choosing to side with Kallavan. She orders them to leave before she changes her mind to attack them.

The Suspendship with David Hockney and party arrives at Baam's location. Daleet stays behind to prevent the wall troop's pursuit. He'll take whatever punishment comes his way. Before their departure, Baam yells at Kallavan and declares that he'll defeat him in the future and bring back his master. Ha Jinsung. After everyone leaves, Dowon formally introduces herself. Kallavan warns her against betrayal but she states that she'll see how the events play out. She also asks him to do something important for her.

In the wall town, Koer is frantically running but Dowon appears in front of her. He says he was trying to awaken her but she tells him to spare the lies. Since she has Khane's memories, she knows the whole truth about everything that has transpired. She proceeds to kill Koer where he stood. Daleet walks in and sees Dowon. She says that she knows him thanks to Khane's memories. She tells him he's a nice guy and to protect Khane or else she'll do something bad to him. Dowon vanishes from the wall.

Inside the ship, Baam re-encounters Yool. There, he states that his captain knows about the whereabouts of Ha Jinsung. He's being held in a place called "the Nest". In skies above the wall, Kallavan is receiving a call and has been ordered to meet up at the Nest, a base controlled by the Lo Po Bia Family.

The Nest is located on the 55th Floor of the Tower. Inside of Maschenny's float ship, Ha Jinsung is seen confined in an electric orb with both arms and legs restrained. Khun Maschenny Zahard is seen conversing with him. Ha Jinsung askes why he's kept alive this long. Maschenny states that he'll soon know his purpose. Outside, a small armada and the Ancient Odd-Eyed Giant Cobra assemble. 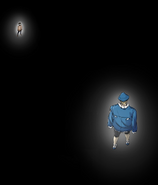 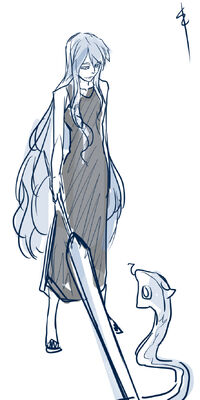 Today's doodle is Maschenny and the giant snake we saw at the end. The mood around Maschenny changes a lot based on her clothing and style. Of course, they are all ominous in some regard... Next week will probably be the Three Baylord brothers ^^;; That is a strong request from one of my assistants who are stepping down this time around. Of course, these days, the topic and the quality of the doodles are entirely up to me haha.

Actually, the throat cold that has been plaguing me for almost a month still hasn't healed, and I have a fever now too, so I'm writing while on drugs. he. If it doesn't make sense or if there are typos please be understanding.

This chapter has the story of the other wall, unlike last week. We have Dowon's story be the center of the story: personally, I wanted Dowon and Cha's story to be more so about the idea of war, and the conflicts and themes that could develop from war, more so than for Baam's story. Of course, many people have different opinions on this, but for me, the critical reason why Dowon and Cha's path split was because the people who protected the seal had two different mindsets. Cha's seal maintained in order to stop the sacrifices just as Cha wanted and to protect Dowon's will, whereas Dowon's seal was maintained to maintain a life of greed by squandering peace... Dowon who received those memories would be definitely hesitant to fight Zahard's Armies. Personally I would have hated both sides hehe. Anyway, I wanted to express that ultimately, it was the hearts of the two peoples defending the walls that changed the paths of their heroes. Of course, one may say Dowon's values are inconsistent, but this Dowon is one who received a whole host of memories that Dowon before the seal hadn't had, and perhaps the true hope of Dowon, even prior to becoming sealed, may have been living a life free from war or society and nation. As Dowon says herself, Kallavan already has enough power to defeat everyone in the Walls, including the Rankers and Baam's team, so in some regards, Dowon is staying true to her past self and trying to move on into a new life. Of course, the story of Cha and Dowon continues, so I hope you pay attention to them.

Also, Baam finally learns of where Ha Jinsung is being kept, and we have the name of the place. It's called the "Nest", and visually it's quite frightful. Wherever they fight, the snake looks like it's going to be hard to draw (....) it's probably going to be our next battlefield.

And now with the weekly corner for the afterwords: The Disease Update: I still have the throat cold.-_- I changed hospitals and drugs, but this is lasting a whole month hehe. The times are the times so I haven't been going out often, but I am going to the clinic again tomorrow and try to find a surefire cure this time. For me, it's less so a cold but more of throat inflammation, but everyone please watch out for the cold. During times like these especially.

That's all for this week.

We got information about the next battlefield (The Cage), and Dowon took off with Kallavan so I hope you look forward to seeing what kind of trails Baam suffers, and how he overcomes.

Self-management is a skill, so I will try to work hard while trying to come back healthy and without a throat cold. Everyone, please make sure to have a mask when you go out, and stay healthy, please.

All of you have a happy and healthy week.