Dowon (2): This is the forty-sixth chapter of Volume 3 of Tower of God. It follows Dowon's rejection of Baam and Yama's continued fight against Yasratcha.

Dowon notices her Flower Shinsu Control Skill being neutralized by Baam's Shinwonryu. Baam's team are puzzled by Dowom's offense towards them and Kallavan spawns from behind. Once spotted, Baam demands that he tell him the whereabouts of Ha Jinsung. Kallavan states that he does not know this since he's only a soldier. As Kallavan prepares to attack Baam, White and Soo-oh rush in to evacuate Baam's party with her shinsu fish. Baam's group move to a different location from White and Kallavan.

Baam demands to return, but Khun states that trying to get answers out of Kallavan is pointless if he doesn't know, especially with Dowon on his side. Before they leave, Dowon appears and Soo-oh quickly teleports the two of them away.

After moving to a new location, Soo-oh asks why she sides with Zahard, an old enemy. Dowon points out how the people she saved have not brought peace to the tower but only cared for themselves. She even notes how they tried to attack Khane. She admits that Zahard is a tragedy for the tower, but she fears that Baam will bring an even worse tragedy. She also states that true peace can only be achieved when all warriors disappear.

In a conversation Soo-oh was having with Khel Hellam, she questions his decision to let Baam live. Khel originally plan to kill him but he soon changed his mind. Soo-oh states that siding with Baam will have a worse result than the past. Khel states that he saw something in Baam that makes him as worthy as Zahard. He will monitor his process and, if he begins spreading the power of darkness, that he would kill him himself

Back in the present, Soo-oh pleads with Dowon to cease her offensive toward Baam. Dowon perceives it as a desire for war and Soo-h retorts by stating that people are always fighting for freedom and a "world with oppression" is worse "world without war." At that moment, the floating ship with Yool, David Hockney, and Lo Po Bia Elaine arrive at the scene. Yool tells her a message from the captain that asks her to carefully choose her side and to wait for the upcoming battles. It also mentions that Baam is from outside of the tower.

Back at the Cage, Baylord Yama and company are still fighting Yasratcha, who is using the possessed canine people as shields. Before he prepares to attack, Evankhell proposes a plan to temporarily blind the canine people, which would let Yama go after Yasratcha. Evankhell summons a giant orb and emits a powerful blinding light. Yasratcha also gets blinded and Yama quickly closes the distance between them. After a swift clash, Yama has multiple across his body. Yasratcha, getting bored with the battle, states that he will spare the canine people if Yama kills himself.

Back at the wall, a coalition rallied by Katra plan to awaken the hero trapped in the wall. They don't have faith in the chairman anymore, claiming Kal Rahim's fear of Zahard's wrath has done nothing but created a false sense of peace. Katra makes contact with Toro, who is another part of the wall. Taro states that he'll wake up Lord Cha from his slumber. 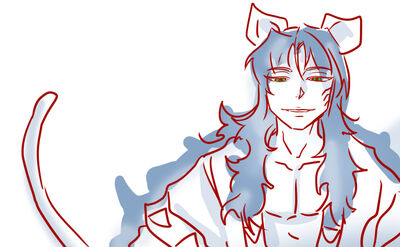 This is the afterwords for Season 3 Chapter 46. I was suffering from a throat cold all weekend, and it was a strong one too. I needed strong medication for it too hehe. I catch the cold pretty easily, but you guys should watch out for it too.

I have to watch my condition, and I have a lot going on, and I've been explaining the work in the afterwords for a while now, so it would be probably best if the afterwords didn't drag on for too long haha.

This chapter continues when Dowon attacked Baam. I think the snake and Hockney crew that came for Dowon.. is the point. The Captain is a mysterious fellow. It seems somehow he knew that Baam was Irregular... How Dowon will decide with that in mind... remains to be seen. We also see the story fro the other walls. In the fight between Yama and Yasracia, Yasracia doesn't seem to like fighting that much. Well, he IS a corps commander, so he would be pretty strong. He makes a bargain between the lives of the Houndborn and Yama's own life. Well, there's not too much credibility to Yasracia's words, so it's hard to believe that he would let the Houndborn live even if Yama did give up his own life haha.]

We also see the story of what's going on in the Walls, and unlike the other wall, this one seems to have people that want to awaken the hero. It looks like things will go differently than it did to Dowon... It looks like the one sealed in here is Cha, as seen in Dowon's flashback.

The awakening of the hero will go faster than it did for Dowon. Probably by the next chapter.

It looks like all the pieces of the battlefield are together, I hope you look forward to what kinda story continues from here ^^

Actually, when I run in to a conundrum during work, I develop insomnia over it, which makes things difficult for me, but after the last few days of feeling dopey on medication, I was able to sleep well .. -_- Now that I'm not taking it anymore... I kinda miss it in a weird way;; I should try harder to sleep normally starting today. Sleep is important ^^;

Now, all of you have a healthy week, and I hope you have happy dreams as you sleep every night. I will come back next week with Yama and Yasracia's Walls. I will work hard for another week.

Have a happy week, I'll see you next week.