Dowon (1): This is the forty-Fifth chapter of Volume 3 of Tower of God. It shows Dowon being unsealed, while Baam tries to convince Daleet to join them.

Dowon is awaken from her slumber and her presence is noted by everyone in town. White quickly introduces himself and asks for her help against Kallavan, a former squadron commander of Zahard's Army. She rejects his offer, stating her affiliation is her choice and unleashes a massive flower Shinsu attack.

Baam once again tries to convince Daleet to team up but he rejects the offer, stating that opposing Zahard's Army courts death. Daleet summons a large, red needle made of gemstones. 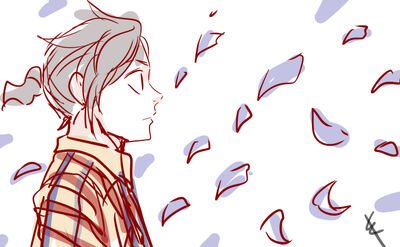 Hello, this is SIU. This week's doodle is Baam. Over there, we have flower petals fluttering in the wind, but in real life, it's fine dust in the wind. I got a cold too. Pollution these days can be frightening hehe.

This week... Dowon's been unsealed, but something doesn't feel right. It looks almost as if Dowon is going to attack Baam.... Wonder why.

Baam's fight finally ends. Baam used metamorphosis and Shinsu together. It wasn't a bloodmatch, but Baam told Delete that they are stronger, and Delete told Baam that he is stronger. There's a lot of variables at play in this fight, and a Ranker's skills depend on their weapons or abilities, so Baam can't be put on Ranker tier with just this one fight, but this does show with proper support, he can face off against a regular Ranker and surpress them. In terms of balance and the opponents Baam face, it is difficult to have many Baam vs Ranker fights, and due to the time frame at work here, the ends of the two fights had to coincide rougly, so it may have been rough in the middle, so I am sorry to the readers that felt uncomfortable with it. Sometimes, I have to push on stories for the reasons I can't help, and it is hard on me too. Please be more understanding.

In summary, in the fight between Baam and Delete, Baam got the upper hand, and it indeed was accomplished without the power of the Thorn, but this doesn't necessarily put Baam as equal to a Ranker in power. There was a lot of conditions in play such as support from Khun and Rak, among other things I tried to emphasize, but if they felt unnatural, that is my bad. There will be more fights with Rankers however, and although for Regulars Rankers are a wall they cannot overcome (except for Baam, who as an irregular can now consider it perhaps possible), and Baam will definitely face rankers beyond Delete, so Baam will continue to be the underdog and face increasingly more difficult fights.

Dowon, attacks Baam while mentioning a Captain. Looking at the reason for attacking Baam, it seems Kel Hellam and Dowon are quite similar. That captain in the flash back... he's all covered up, but he looks a bit like Wangnan hehe. You've seen that face around often, huh haha. He looks a bit like the Zahard you saw from the hidden floor, so I hope you look forward to his identity.

Now, this is the 9th new year since I started Tower of God, with 10th anniversary this year, but I feel like I have more to say and yet at the same time less to say. A work is ultimately made to be enjoyed, but it becomes are arduous journey when you try to have value beyond it. 10 years may feel long or short depending on the circumstances, but I want to enjoy it a bit more, with readers that enjoy it. I will work... I mean try to enjoy it more, because it's work I like.

Then next week, I will come back with our Irregular main character, who freshly blocked Dowon's attack. Sometimes Baam looks really weak and sometimes insanely strong.. what are you Baam..? Anyway, I will be back with him next week ^^

Then, take care of your throats despite all the fine dust in the air, and have a happy and healthy week. I will be back, healing up and still drawing up chapters ​