Kallavan vs White (1): This is the forty-third chapter of Volume 3 of Tower of God. It shows Kallavan fighting White, while elsewhere Baam is still fighting Daleet.

White and Hatsu confront Kallavan and Khane inside the Sealed Hero Tower. There, White reveals that Kallavan was once a squadron commander to Khane. Shocked by the revelation, Khane demanded to know his intentions and he replies that he was going to either persuade or kill Dowon. White tells Khane to wake her up as he stands no chance to the former squadron commander. Kallavan also asks her to awaken her sister. Khane becomes conflicted as she simply wanted peace. Kallavan replies that warriors are only at peace when they die. White throws at slash and Kallavan counters it, and their fight commences.

Back with Baam's group, Baam charges at Daleet with his new Red Thyrssa transformation. Rak amasses many rocks to provide cover. As Daleet blast through the rocks with his needle, Baam has moved above him. He notices this, proceeds to flick his needle at him, and attacks with a barrage of jabs from below. Baam dodges them and Rak's rock cover hinders some of his attack. When Daleet find an opening for an attack, he's blocked by a heated rock wall, and Khun's lighthouses freeze his needle. Baam breaks his needle with the Red Thyrssa and almost hits Daleet with it. Baam begins to wonder if the Red Thyrssa transformation can hurt Kallavan.

Back at the tower, White continuously throws slashes at Kallavan but they have no effect. Kallavan asks if "a certain irregular" is accompanying him as he mocks his strength. White gets offended and another punch from Kallavan pushes him outside. After seeing his sword beginning to break, he discards it and summons a new one called Spinel. The first slash he throws at him vanishes for a moment and then suddenly reappears, which cuts Kallavan's right arm. 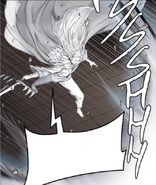 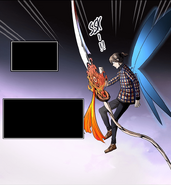 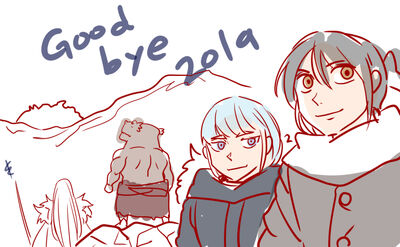 Hello, this is siu. Did you have a good Christmas? I spent it working as usual, but you know hehe. I still tried to get into the holiday spirit by buying cake and stuff. I used to be "too cool" for Christmas, but now that I'm older, I've been feeling more festive. Haha. Maybe I always wanted to celebrate Christmas. Anyway, the theme for this week's doodle is Goodbye 2019 hehe

You may think that the main party has been developing rather slowly, but having this underdogs fighting gigantic enemies is Tower of God's thing, so I hope I can bring that out to the best that I can. Well, Baam is not an underdog in his weight class no more if he uses the Thorn or uses Shinwonryu, but it just looks like it because he is fighting enemies that are much stronger than him it feels that way ^^; Baam is self aware to the point where he treats this as training. He knows his end goal after all.