The Wall with a Forget-Me-Not (4): This is the forty-first chapter of Volume 3 of Tower of God. It shows Khane joining with Kallavan to unseal Dowon and Koer siding with Zahard over FUG.

Seeing how Khane just made contact with the "intruder", Koer's belief that Khane has conspired against them has been confirmed. Khane tells Kallavan to stay at his current position and she handle things on her end. She attacks Koer but she missed. The guards are summoned and they try to reason with her but she quickly kills two of them with her Shinsu attack.

Koer is seen running and cursing Khane for her disrespect towards him. Soo-oh appears in front of him and requests that their forces team-up since the town's guards stand no chance Kallavan. He quickly accepts her offer.

Back at the prison, Baam, Khun, and Rak encounter Daleet. Before he attacks, a message from Kal Rahim arrives in his pocket instructing Daleet to work with them in order to eliminate the intruder. Kallavan is seen near the tower, killing many guards along the way. Khane arrives and tells him not to kill anyone or attempt to destroy the wall as they make their way to the tower. As they're travelling, Khane informs him of two rankers that still guard this place. As they arrive at the tower, they are met with more guards. Kallavan releases a massive attack that completely obliterates one of the guards. The others become frightened of his power and flee. Khane now thinks about how to remove Kallavan after her sister is awakened.

Hatsu is speaking to Baam's group wth his pocket and is informed them of the temporary ceasefire. However, he notices White going on a killing spree but he can't help but notice his wonderous swordplay. As Baam's group quickly make their way to the tower, Daleet informs him that he's not as strong as before and Tonki is their last line of defence. He also asks about the intruder and learns about how Kallavan was a squadron commander of Zahard's Army. Hearing this, Daleet quickly turns on them, reveals that the temporary ceasefire was a ploy to gather information on the intruder, and, in the event of learning that the intruder was stronger or a member of Zahard's army, to kill them and side with the intruder. Knowing the power of a squadron commander, disobedience would mean death but compliance would ensure peace for the wall.

In front of the Sealed Hero Tower, Khane and Kallavan are met by Tonki, who assumes that Khane has betrayed the people and attempts to release Dowon. Khane states that people have betrayed and badmouthed Dowon who fought for their lives. Tonki becomes relieved after hearing that. Tonki was aware that he was guarding a war hero, but he doesn't know their character due to the memory wipe and he was contemplating resignation. However, he stayed seeing how Khane came to see her every day. He decided at that point that he would remain guard as long as Khane visited and would stop her if she rebelled. Seeing her at the front gate, Tonki prepares to attack and Kallavan approaches. 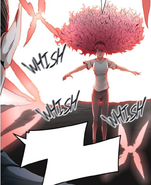 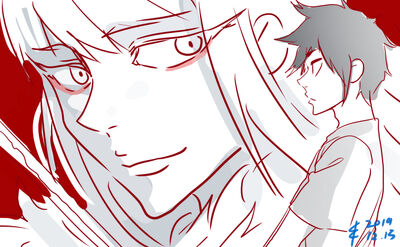 Hello, this is SIU^^

Today's doodle is Hatsu and White, two who have been interacting a lot lately. From our perspective, one's an Asian and the other one is a European style swordsman, but in the Tower, they' are two swordsmen in the Tower, who are very rare to begin with, so their connection is quite significant.

In this chapter, we saw a continuation of what was going on in the previous chapters. The Chairman and the Wallsguard backstab Baam while pretending to be allied with them. Of course, personally I consider myself a "safety first rationalist", so I don't blindly criticize them, but I would avoid opposing the main character of a cartoon if I can help it haha.

Recently, we have average rankers starting to lose their menace, but Baam's team are still regulars, kids who haven't been able to even try and stand up to Rankers until recently. Of course, they recently saw rapid growth, ganed overpowered abilities and items, and Baam's become unimaginably powerful, but becoming a Ranker is a major goal for someone in the Tower (although there are multiple tiers among Rankers as well.) In other words, Baam and company fighitng a Ranker is an incredible challenge from the underdogs. Of course, you are a betting person, you should generally bet on the main char- (gets gagged)

Anyway, although he's a Ranker in a remote location, Delete is not a weak ranker. I hope you enjoy this fight between Regular and Ranker.

We see Hatsu being amazed at White's sword. They have opposite personalities, but it seems like he respects White as a swordsman. Honestly, it would be pretty hard to not respect him. Aries are an object of envy for Swordsmen, and White was once one of the strongest among them. Of course, ever since the Hell Train he's become very powerful.

In ​the last scene we see Tonky and Kallavan face off against each other. It seems Tonky and Kallavan has similar pasts. Kallavan respects Tonky, and as such he will beat him up with one arm. Well, I don't know who he's fooling, but the battle will continue next week.

This week and next week's chapter has a slightly different order of events from the previews. I thought this flow made more sense in the grand scheme of things, but there is no change in content ^^; I guess in building up the narrative I have concerns, and I personally want to go more intensely into the detailed progression, but I hope you enjoy what's coming.

And good news: both book 1 and book 2 have been sold out, so we're going into additional printing. Although this is late and this may fall short from your expectations, thank you and thank you so much for these results.​ _ _ A portion of the proceeds will go to children or those less fortunate, and the rest will go into the Feed SIU Yummy Food Foundation haha. I hope I will get to publish more volumes as I get time, so we can continue printing more. Thank you ㅠㅠ

Then next week, I will come back with Kallavan and Tonki in combat, along with Team Baam, and White with Hatsu.

Although I may come up short, I hope you have a happy healthy, and plentiful week.