The Wall with a Forget-Me-Not (3): This is the fortieth chapter of Volume 3 of Tower of God. It continues the flashback of Dowon's past, where she agrees to be sealed for peace and safety of her kingdom the Land of the Peach Blossom.

Confronted by the Ancient Odd-Eyed Cobra, Dowon attacks it with her Flower Shinsu Control Skill. After the attack, she noted that the beast hasn't been defeated yet. The snake begins to speak to them, commenting on the impressiveness of her strength and how she was able to defeat his brother. Taro York realizes that the snake is being used as a medium by the 8th son of the Lo Po Bia Family. The snake was about to speak but was interrupted by an attack from Cha as he arrives with other members of the Hidden Grove team.

The snake then tells Dowon that Zahard's forces are currently surrounding her home of Dohwa and threatens to annihilate it. Following the death of the Lo Po Bia Family's first direct descendent, the family head was both enraged and saddened. Zahard's forces are also tired of the war and the Lo Po Bia family head has developed two proposals: coexistence or extermination. Zahard wants the spoils of war from his enemies with one of them being Dowon. The snake medium says that the rebel leaders are to be sealed away. The people of Dohwa have also agreed to have her sealed. Dowon was shaken by this revelation.

The next day, Dowon tells the Hidden Grove team that she would be returning home. Some argue against this but she tells them that there are no other options. Her father was a knight of her kingdom. When Zahard declared himself the "King of the Tower", he was ordered by the King of Dohwa to fight Zahard. He would lose his life in battle and Dowon and Khane went to become Rankers to fill his spot and fight Zahard. In another room, Dowon tells Cha that she's leaving only to see him with his back turned, stating that he's fine with her decision. Dowon quickly deduces that he has feelings for her. Before she leaves, he asks if he can ask her out once they meet again.

At the Royal Palace in the capital city of Dohwa, Dowon meets the King who debriefs her about their current situation. Zahard's forces surround their country, they suffering a shortage of manpower, and a slim chance of aid from FUG. Hearing this, Dowon agrees to be sealed in order to save her country. Her townspeople also had their memories erased and were forced to relocate to the Wall of Peaceful Coexistence. The king of Dohwa lost his status and became a chairman of the wall. A saddened Cha would later leave the Hidden Grove team and go on a violent rampage, slaughtering numerous members of Zahard's Army and instilling fear into their hearts by himself before he disappeared. Later, he would reappear to give himself up to Zahard's forces and was sealed in the wall. He probably chose this in order to be sealed with Dowon so they could be awoken together someday.

With their leaders gone, the remainder of the Hidden Grove joined forces with Khel Hellam. With Khel's ability to see destiny, he devised a plan to go after Zahard himself in order to change the tide of the war. While many opposed he went ahead with it anyways. To their surprise, they actually did make it to Zahard himself. Unfortunately, everyone on that team was either killed or taken prisoner. Soo-oh says that Khel's arrogance was probably at fault and perhaps Zahard used that aspect to his advantage to display his true power. Also, there was a traitor in the Hidden Grove team.

As more anti-Zahard forces were being defeated, more walls were being erected where the defeated were forced to live under the promise of peace. They soon accepted Zahard's domination and newer conflicts overshadowed the "war heroes." Some of the newer walls lack chambers of people who can unlock them. As of the present, there are only three still intact.

Soo-oh states that Dowon or Cha might try to get revenge if they were to learn about the events that transpired after their sealing. However, since Zahard's forces are stronger now, it will result in a swift defeat. Knowing this, Baam concludes that Zahard wants them to wake up in order to have an excuse to start a war and sent Kallavan to do the job. Hatsu says that they should let them wake up since it's their decision if they desire revenge, which angers Soo-oh.

As they were arguing, they could hear a commotion outside. Khane has been taken on custody is being brought into the town square. Soo-oh says that the townspeople believe that she's conspiring with the "intruder" to release her sister from her confinement and demand for her execution. However, her death means that Dowon will stay sealed. Hoaqin states that Kallavan will not stand by and watch her be killed. With that, the group breaks out their cell.

In the town square. The guards presents Khane to the chairman Koer. At the square, Koer discusses how the intruder has been seen entering Khane's house and has contacted her pocket. He asks if she's conspired with him and she replies "no." Telling her that have overwhelming evidence, he asks her why he was at her house and she replies that she kicked him out before a fight could break out. The people from below yells that she's lying and she's trying to awaken her sister. If that happens, Zahard's army will annihilate them.

Koer asks everyone to calm down. He tells Khane to prove that she wants peace by sealing herself in the wall as well. With her sealed off, the threat of her sister's emancipation would be eliminated. Khane, angered by his proposal and the countless jeers of the public, rejects his offer, curses the chairman, and admits that she's conspired against them. With her pocket, she calls Kallavan and yells that she wants to wake up her sister immediately. Kallavan gladly accepts and begins charging his fist for an attack.

Outside of the prison, Baam, Khun, and Rak are running toward the square to help Khane and stop Kallavan. Hatsu and Hoaqin have split off to search for their swords. Baam's group encounters some guards and Baam proceeds to attack them with the Red Thryssa. 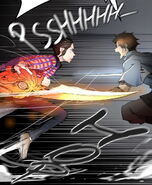 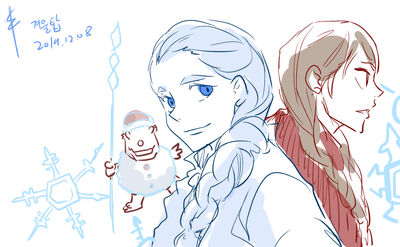 This week's afterword doodle is a parody of Frozen, which is popular right now... I haven't actually seen either and all I know is Elsa and Olaf keke (I didn't know you spelled that with an O). I listen to their music regularly though. When Frozen 2 goes for sale for streaming, I think I'll binge them hehe after a dead line of course. I watched Disney when I was little, and the kids of today still watch Disney. Disney is truly amazing.

This chapter... is a continuation of the flashback. Some of the characters in the flashback will appear in the story later, so the flashback may seem sudden, but I hope you enjoy them still hehe.

In the past, we see a lot of names and countries named after Flowers, and it seems many nations were named after flowers in those days. Actually, the Hidden Floor had a similar bit of lore, which may be related.

I thought about making the story about Dowon a bit longer, but it's a bit much to go on for more than a week with a new face, so haha. We finished the short story of the Hidden Flower Garden and come back to the present.

The story of Canne and the People of the Walls. Regardless of the story's theme, the people of the walls could be victims of an ongoing issue. But scapegoating someone while thinking of themselves as weak is something both very natural and very wrong. Of course, I may do something similar if I was in that crowd ^^:

So Baam's team, after hearing about the past goes to stop Kallavan, and Canne goes to awaken Dowon with Kallavan's help.

Now this side of the walls are about to see combat too. This arc is, along with the next arc, is a lay over into the coming arc, so it will have many shorter but packed fights.

This chapter, like the last one has some additional panels. I always have changes I want to make after the chapter goes up, so even if it's extra work I do try to raise the quality of work like this every once in a while. I hope those of you who saw the previews get a more out of it the second read through too ^^

​Personally, I've been getting into the habit of getting myself housing appliances, so I bought a cordless vacuum cleaner. When you're working, cleaning, and feeding yourself all at once isn't easy hehe. I am personally very happy about the recent developments in household appliances haha.

Now, the winter is setting in frightfully, but please stay healthy, and I hope you have a safe week without incident.

I will clean, do dishes, meet deadlines until I see you next week, when I will come back with Team Baam on the move, Canne, and Kallavan.

Retrieved from "https://towerofgod.fandom.com/wiki/Vol.3_Ch.40:_52F_-_The_Wall_with_a_Sleeping_Forget-Me-Not_(3)?oldid=135911"
Community content is available under CC-BY-SA unless otherwise noted.