The Wall with a Forget-Me-Not (1): is the thirty-eight chapter of Volume 3. It shows both Kallavan tracking down Khane, the one able to unseal the war hero, while Baam's team try to stop Kallavan.

In a ship traversing another area of the 52nd Floor, David Hockney and Lo Po Bia Elaine are conversing about how they still couldn't find the missing piece to his painting. Yool announces that Baam has been relocated to another floor, and thus, begins traveling full-speed to their location.

In a cave near the Wall of Peaceful Coexistence, Baam's party begin marching to the wall. According to Khel Hellam, the war hero trapped in their section of the wall is an extremely powerful female. He also can't seem to locate the other war heroes. This powerful female warrior may be able to help them battle Kallavan. As their team sets off, Ship Leesoo remains to guard the ship (even though Hatsu states that he useless in battle). While waiting, he notices Myan acting strange. Myan proceed to puke out Soo-oh. Soo-oh asks Ship Yeesoo about the other's location.

Kallavan is seen walking in a town within the wall. Before arriving, he's on a ship having a conversation with the 5th Vice-Squadron Commander. The commander then begins to address the information that Kallavan requested. The female warrior fought around the end of Genesis. She willingly sealed herself into the wall in order to stop the war. She also wiped out the memories of those living in the wall that knew her. The Vice Commander advises that he avoid doing battles with her but Kallavan responds to him that he must as he has sworn an oath to Zahard to have his arms tied. The Vice Commander also states that a woman named Khane is the younger sister of the war hero and her memories weren't wiped. Kallavan states that he'll prioritize her first.

Back in the present, one of the leaders of the wall guards is having a conversation with Kallavan with their observer. They try to convince him that the wall guards are not part of an anti-Zahard faction. They only wish to preserve the wall as the destruction of the wall means the war heroes can escape and raise more chaos. However, they notice that he vanished during their talk and not even their observer noticed his departure.

At the gate of the Sealed Hero Tower, Khane is seen arguing with Tonki because she was not allowed inside to see her sister, an activity she does daily. He replies by stating that an intruder broke into the wall and they were heightening their defenses. Tonki reminds her that she's the only one in town that remembers her and that her sister's release could spell the end of the wall.

In a data room in the eastern part of town, Kallavan stands among a group of guards he had slain. Kallavan learns of Khane's residence and ponders about his method of persuasion. Several hours later, a distraught Khane sits at home, reminiscing her sister's final moment before she seals herself. Kallavan arrives at her places and reveals himself as the intruder and wishes to awaken her sister. He offers her his help but she quickly refuses, stating that she promised to never undo the seal. Kallavan departs and leaves behind his pocket just in case she changes her mind.

Khane once again reminisces about a conversation she had with her sister. Her sister reminds her about what their master told them about a great man and how his child might return to the tower. She tells Khane to wake her up if the time comes.

Back with Baam's party, Kal Rahim denies them access to the wall. She tells them that Kallavan came here earlier and ten people went missing ever since. Seeing that she wouldn't budge, Baam decides to reveal himself as "Jue Viole Grace", the candidate slayer of FUG. She then proceeds to grant them entry. As they march inside, they encounter guards lead by ranker Daleet who declares them under arrest.

At the same time, Khane walks to the public square in front of the Sealed Hero Tower, with a large bouquet of Forget-Me-Nots. There, she sees townsfolk throwing rocks at the flower statue honoring her sister, stating that she is the case of their recent misfortunes. She then remembers her trying to talk her sister out of self-sacrifice. Even though it will be hard for her, she simply desires to bring peace for her people. She restrains herself and then sees Kallavan come to quell the stone-throwing. After they realize that he's the intruder, the townsfolk flee the area. He turns to her and asks if she believes that this is the peace her sister wanted. 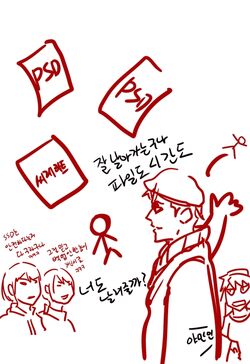 Hello. This is SIU the Mentally-breaking-down-from-corrupted-files.

Haha who said SSDs are safer....

Anyway, after working all day today I got most of the work restored, so next week's deadline won't be affected, but it is discouraging to say that, that despite working harder than most weeks, I'm just now back to square one. So today's doodle and the afterwords are gonna be all whatever (yeah...)

Before I go into the rant I'll talk about this week's story. So Hockney and Kaiser (I guess they settled on calling her that) have been looking for the Thorn Fragment. However, with the power of science, they're headed off somewhere else.. hehe

Kallavan's at the walls, and although it seems like waking up the hero won't be as hard as predicted, but once awoken, few would be able to handle her. Kallavan doesn't seem to be too confident in himself when he hears that he somehow needs to convince the hero's sister.

Team Baam also arrived, and... Baam, the ever proud goes "Hey! I'm a Slayer Candidate!", only to be locked up by Delete, in his fairness and wisdom. It seems it's really more of "I don't want any trouble, so all of the get the hell out". Anyway, these walls, unlike the ones by Yama don't seem to be too cooperative with the FUG.

Canne, Younger sister to the Hero almost gets angry from seeing her sister's memorial face criticism following the Intruder(Kallavan)'s enterence, but she reminded herself to be patient and turned back... only for The Intruder (Kallavan), the one behind all of this, appears before them and slaps the locals silly in a flamboyant display of power. Isn't this cheating for a High Ranker to be doing that to a civillian;;; Anyway.

Since it doesn't look like he can use anything but force to convince Canne, Kallavan is using force first and figuring out what to do then.

Will Baam's party be able to stop Kallavan, whose fists are faster than his words! Will the Author still complete his drawing goals despite losing all of his files! I hope you look forward to the future!

So that's the summary of this week's plot hehe.

Any...way... it is not easy to get a hold of yourself after you lose your files. It's not easy to do the same work over and over again, and you also lose time to rest, so haha. Actually these days back ups were rather systemized so it was working well, but this breaks out all of a sudden one day. Well, it's a relief I got most of it recovered, even though it meant saying goodbye to my weekend. Being an author.... it's fun and not too much physical labor, but it is a job that requires a lot of mental fortitude and patience. Well, sitting in the same position for a long period of time does get hard on the body too ^^;; But thinking of my grandparents who were farmers, I am definitely more of a grasshopper than an ant.

Recently there seems to be a lot of tragic events happening. Even if it's not a celebrity, I hope everyone understands that everyone else too hold difficult things they hide from this world. Wouldn't it be better if we could be happy together instead of wishing misfortune upon each other? However, to be happy comes with a lot of things that cause unhappiness, which makes things difficult. Although my goal changed, back in a time that I no longer remember, from finding happiness to just living a good life, but I hope at without any specific desires, I just want small happiness for all of you. I will find my own way to live a good life.

Anyway, next week, I will be back with Kallavan, a man whose words follow his fist, and The Slayer Candidate who went to jail for impersonating himself.

Be happy and have a healthy weak.