52F - The Wall of Peaceful Coexistence (5): This is the thirty-seventh chapter of Volume 3. It shows the battle between The Cage and the 4th Army Corp of Zahard's Army, while Baam arrives at the other wall.

Yama's Gang, Evankhell, Karaka, Doom, Paul, Khel Hellam arrive at Yama's location along with the whole Cage. One of Kal Rahim's observers confronts Khel Hellam and wonder why he sent Yama here alone. Upon arrival, Doom realizes that the opponent before them is Yasratcha and quickly orders them to move the Cage far from here, but it was too late. Tendrils emerge from Yasratcha and members of Yama's Gang become mind controlled by him and start attacking the others. Doom questions the elder whether he intended for this to happen. The Elder is now puzzled and wonders if Zahard's army foresaw all of his predictions. Evankhell begins to attack Yasratcha but he uses Canzon shield to hinder her advance. This angers Yama and he unleashes a new technique.

By another area of the wall, another one of Rahim's observers confronts Kallavan, where he requests to join Zahard's army. Rahim questions him and Kallavan reveals himself as a former Squardon Commander who was demoted who wishes to help. As Rahim was about to deny his request, Kallavan demonstrates his power by passively destroying a section of earth. Witnessing his power, Rahim allows him aboard his ship.

In a flashback, for his failure at the Last Station, Kallavan was being scolded by Ke-sa the Furious, claiming his demotion was "a slap on the wrist" and he should be grateful that he's not being executed. Kallavan pleads for a second chance and Ke-Sa responds by stating that he has an assignment from the commander-in-chief. Yasratcha soon enters the room and their debriefing begins. Their mission is to destroy two areas of the wall and release the "war heroes" trapped inside. They must make them surrender or kill them if necessary. Kallavan asks for the reason and Ke-Sa states that the Ha Family angered by the treatment of Ha Yuri Zahard, the Po Bidau Family have cut ties with the 10 Great Families, and a possibility of the war. The commander-in-chief places the "irregular who escaped from the last station" as the root cause. This preemptive strike is to prevent rebel forces from forming. 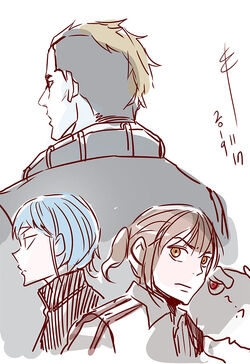 TN: Please remember to take SIU's blogs with a grain of salt.

Hello this is SIU _ _ This week's doodle, in theme with the last panel, is Baam's party with Kallavan.

While the control shifted over to the rest of the Houndborn, Yama goes through Full Metamorphosis...

And then we see Baam's side. Baam's party made it to the Walls where Kallavan is. For the next while we will be continuing the story of the two walls separately. Later when their battles merge, their battle will become massive, so the tale of the split brothers worries me, but I still have 9 years of experience, so I hope you you guys will enjoy it (bows and bows), as we proceed. I hope you enjoy the story of the heroes in the walls, and the other side stories in the walls as well.

This week we had the KSATs. Unlike back in my days, there's many students going for the Early Admissions program, so some of you already know which college you're going to, but the tests are always a scary moment. To those of you test takers who've come so far, you all did good work ^^ Actually, I've always wanted to do an event for those who have completed the KSATs, but I'm shorthanded so haha.... I will do it some time if I can.

Actually, now that the year's almost over, I've been looking around here and there to donate to, but nothing is easy. Regardless, my end-of-the-year resolution is to donate more, at least a small amount ^^

And also my new year's resolution this year was to draw out Season 3 good ^^; whenever it became the end of the year, I always reflect on how much I've fallen short and how I could have done better. Maybe next year I can do... hmm. a bit better hehe.

Now, as the weather gets colder, please be careful of your health!

And I will return next week to Baam's team, who flew over to the walls.

Stay happy, and have a healthy weak.