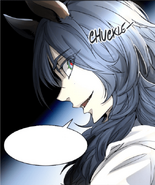 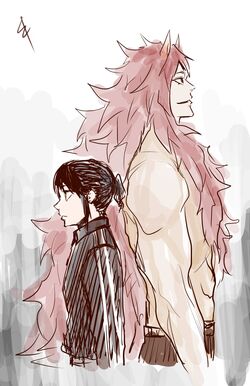 Hello, this is SIU. This is the afterwords for Season 3 Episode 35 _ _

This week's doodle is of the two who are now on the same boat. Faithfully to the lore, there should be a much bigger height difference, but since I need to fit them in one panel ^^; I shrank Yama a bit. If we ever saw the two in action together... that'd be cool.

This chapter, like the last one has the battle happening on two sides. The Cage Front is wrapping up. As you can see from the Elder's words, the Elder wanted to take the Houndborn to the walls, so there is no point in continuing combat now that the Spell on Doom was undone.

It would be hard to say who would have won if the battle continued, but the Elder certainly didn't feel like he was at a disadvantage.

An Elder of FUG faced off Rankers for such a long time, and have plenty of experience, so they tend to look down on people like those currently at the Cage. ​ ​In a battle with no outside variables and considering only power, it would be hard to say Evankhell or Full Metamorphosis Yama would be behind Kel Hellam, but Kel Helam sees fate, and has a lot of cards or experiences to pull from.

Of course, Evankhell was too busy defending to actually attack, and this isn't FULL Full Metamorphosis from Yama either, so this is still a mystery. (Lore-wise if you ignore everything but power, the Yama-Evankhell combo is not below Kel Hellam).

Anyway, eventually the Elder suggests to Baam that he goes to the Walls, but will Baam actually move to the Walls where Kallavan is...please be on the lookout for that.

On Yama's side, we have Yama fighting the Division Commander (DivCO). This is Yama being strong, not the DivCO being weak. A DivCO would be the star in a movie of Rankers being extras in terms of power. Anyway, Yama may be peluso, but Yasracia may gee a poor match up for him ^^; We see Yama being controlled by Yasracia at the last scene, how will the battle continue...

As we have two sides of the narrative going in, and they're both pacing to each other, so the progression may not feel satisfactory for either side. Despite this, I'm trying to cover as much ground as possible, so please keep that in mind as you read this, that would be much appreciated (bowing bowing) _ _

Now that we've been synchronizing until this week, we'll try to cover more next week. ​ ​Personally, despite the improved weather, I've been having trouble sleeping. Ever since I started uploading I had a case of insomnia every Sunday night, and these days it's really hard on me hehe. Some say insomnia is an artist's curse, but in this day and age of conversation, this doesn't end at being a personal problem, which makes it rather problematic haha. When I think of it, when I worked alone, my hand hurt more but was under less pressure. Of course if I had to go back to that style of work I wouldn't be able to handle it ^^;;

I don't know about keeping true to my origins, but I would like to at least be balanced as I continue forward [TN: SIU puns here, as "origins" and "balanced" share a stem]. I should try working hard, working hard. ​ ​Well then, I'll be back next week with Yama, currently Charmed. Good night everyone, stay healthy,

For this week as well, Thank you!