52F - The Wall of Peaceful Coexistence (1): This is the thirty-third chapter of Volume 3 of Tower of God. 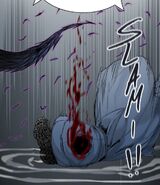 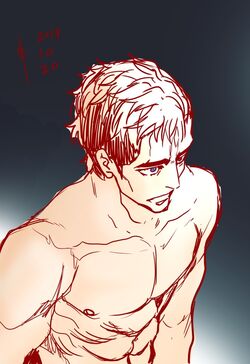 Hello, this is SIU. This time I drew Kallavan as we saw at the end today... He grew out his hair. Kallavan showed up earlier than anticipated in Season 3. I would love for things to go how I planned it in the first place all the time hehe, but initial plans always get slightly derailed over time. These days I give the excuse by quoting the movie Parasite, saying "The best plan is no plan" haha...

This week... This seems to be a wrap on the fight with Gado from last week. Gado, seems to have a rather human side considering that he was essentially the peak Houndborn. Maybe that's why he fell in love with a human, not another Houndborn. Of course, that ended up driving all of the Houndborn kind into danger... I haven't married nor do I have kids, so I don't know what it feels to be a parent yet, but I do understand a parent to whom their child is worth more than the world.

Baam seems to have unraveled the spell rather easily. It may seem awkward that he is able to do something difficult so easily, but Baam doesn't really know much about sorcery in the first place, so... I decided to make it look simple. To add on to the lore as the author, that spell is actually supposed to be incredibly difficult undo;;

Yama's end has its side get divided up somehow, so... (.... Kel Hellam, it's all because of you) Yasrachia seems to have noticed Yama's existance.

We also as a bonus see Kallavan for the first time in a while.

Now we have a framework of the narrative of the story of the Walls of Peace and Harmony. Since we have two whole Corps Commaders (TN: They would be lower-ranking generals), the battles ahead should be rather difficult.

Due to moving the workplace I take the bus sometimes, and on the little TV on the bus (TN: They have TVs in Korea connected to a dedicated public bus channel), they had celebrities talk about whether spring or autumn is better (on TV, that is) I said "of course it's spring" on the inside haha. If you think about it, in spring, you still have autumn to look forward to, but once it's autumn, the spring that year's already gone, so you end up with a bit of a melancholy. Autumn ends up being more lonesome, being a chance to be reflect on the past. I myself felt very pressured and worried this year, but now that it's all past I think maybe it was all for nothing, and perhaps I may have even made things harder on myself, taking unnecessary detours, perhaps I bothered myself with extraneous worries when I could be happier. Those were my thoughts.

I rambled on, must be the weather.

Next week, I will return with that webtoon where they put a dog and cat in the same place!! I should let Baam's side show some strength too. Then I hope all of you readers have a happy and healthy week. As I write these afterwords every week, I truly hope all of your week shines bright.