52F - Transformation (3): This is the thirty-second chapter of Volume 3 of Tower of God. 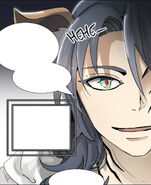 Dog and cat. It would be weird if they didn't fight.
(Yasratcha is the name of the corps commander, not the family head)[1] 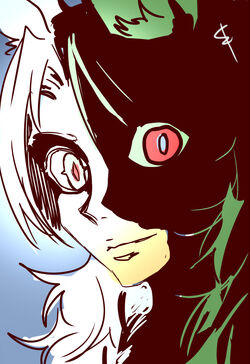 Hello, this is SIU. It's getting chilly now. Come to think of it, I started uploading when the cold just ended, but now that it's cooling down it's making my heart feel heavy haha. Reflecting on whether you've been doing good work, and whether you can continue it is a difficult task. Especially if you've been drawing for a long time.

This chapter... Baam cut off Gado's foot. Actually, we see Zon use informal tense at Baam here, which is a tone shift from before, but when I had Zon use formal tense there, it was quite awkward... Zon is internally quite hostile to Baam, almost looking down on him, so the underlying thought process is that his true feelings came out in the heat of the moment. In this particular scene it flowed well, but it may have been awkward in the grand scheme of things. I thought whether I should change it for the main release after it was out for the previews, but I decided against it after trying some edits. (If you guys think otherwise, I do have plans for changing it and reuploading)

Anyway, it's Zon underestimating Baam -> Baam's attack -> a force that puts Zon's estimate to shame. Gado's feet getting cut off feels like it makes Baam OP, but Thorn + Red Bari buff is in play, and looking at the lore face value out looking at their specs, something even more over the top wouldn't have been crazy for these guys, so.... I feel like narratively I have to keep them in check normally and then jump forward on weeks like this. It's hard ^^; Manhwa is hard. In conclusion, Baam is a regular but is also REALLY dangerous...? ​ ​ ​The fight between Yama and the Elder shaped up to be a normal fight, but it's suddenly going in a completely different direction. To think the fate the Elder saw last week is this... On a side note, the Elder and Sowo's teamwork seems rather brokenly powerful.

Honestly, as an author I wanted to have them start roadrollering them into the ground, but because this arc is a part of the fights yet to come, and Yama's opponent wasn't going to be the Elder but Yasracia we saw at the end, so I used the Elder to send Yama to the 5 Corps. Haha... The fight at the Cage will continue hehe. ​ ​ ​Now that I think of it, Yams is a slayer that has less than a years worth of panel time, but he's in one day getting involved with the Elder and Baam. Huh. The 5 Corps all of a sudden...

​Many of you thought based on Doom's flashback that Yasracia is the family head, but he is not the family head but a Corps Commander from the Lo Po Bia family. I apologize for any misunderstandings. Well... Doom's honestly not someone that's even relevant enough to hold direct grudges against the family head. Anyway. Yasracia. It's a cat. Cat. ​

Starting this week, the narrative will flow in a different direction. The story of the Cage will continue, of course. Actually it's always hard during this narrative splits, because there's no right answer.

I keep asking if this was the right move or that constantly. Haha. But the best direction to move at the end of the day is forward, I think. That's how we came from the end of the cold season to the start of the cold season. Step by step is how I feel. When I look back, I think to myself I should have done better, I should have done better, but I keep moving forward.

This post got... ridiculously long it seems ^^;; (Adio: You think?) I've been having a lot of different thoughts. My head's too small to even properly focus on Tower of God, but this is big, something regrettable. Living itself is a task, but living with your work is one that's harder.

I hope you all move forwardvas we go to the end of 2019. I will be back best week with another chapter.