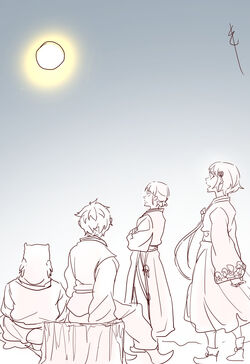 ​Although Chuseok (TN: Korean Thanksgiving) is already over unfortunately, since it's still the last day of the Chuseok weekend, so I drew the afterwords image in the theme. Now that I think about it, it's hard to see those four together these days. I hope they will soon. Lay week I wrote how I couldn't believe it was almost Chuseok last week, and now I can't believe believe Chuseok's already over hehe. People say the future is more important than the past, but now I am starting to feel accountable for the past at my age. "Well, I'm an average citizen, so even if I'm not exactly a defender of justice, I didn't hurt anybody" that's how I feel ^^ ;;

Actually, usually until now my assistants helped out for a day or half a day during the major holidays like Chuseok or Lunar New Year, but this time, everyone besides myself were able to take the entire holiday off. Of course, even I took some time off too and visited my parents for a day and came back to work. As such, the last few weeks of previous chapters were shortened too... I am now trying to figure out how to plan out the work from now starting tomorrow, but... ^^;; I like to think of it as a small change for the better.

So today's chapter... um... White's battle continues. I did skip out a bit because I didn't think this fight should be too long, but White has more skill than a Ranker for sure. Sometimes he uses High-Ranker level power willy nilly, but he also goes plop plop and falls on his face too, so... hehe. Actually, having this much power as a Regular is unbelievably overpowered, so having that kind of a weakness seems to balance things out nicely. Still, with Arie Swordsmanship and Soul Absorbtion, he seems to be "growing".

Yu Hansung started fighting the Elder's companion. People were thinking she's a Guide even though it hadn't been officially stated in the comics. Is.. is she? (Looking susp) She looks quite strong, and her techniques are hard to draw. Still, it seems top have come out beautifully, so I'm happy with that. ​ At the last bit, we see the Elder that was fighting Yama and Evankhell bringing out the power of the Ancients. This is going to be probably a true battle of might against might. Although it's going to be mostly fight scene and therefore rather chaotic, I still hope you guys enjoy what's coming up next. ^^

So the Chuseok holidays went by. I saw my parents for the first time in a really long time, and I finally realized what it means when they say "My feet wouldn't move"(TN: Korean idiom). It feels like that I'm realizing quite late how a lot of things change and fade away. I hope my work and my person changes and develops for the better, but that's not easy.

I hope you had a filling and healthful holiday. I will come back next week with the Elder's Ancient. May all who wished upon the Harvest Moon (TN: my personal preferred, more poetic translation for Korean Thanksgiving/Chuseok) have their wish come true! Have a happy week, thank you.

Retrieved from "https://towerofgod.fandom.com/wiki/Vol.3_Ch.28:_52F_-_Khel_Hellam_(2)?oldid=132056"
Community content is available under CC-BY-SA unless otherwise noted.