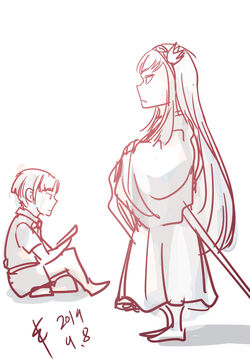 ello, this is SIU. Since today we have White, I drew the children that are now one. You know, although I don't know when, but if I end up in an arc where I have to draw a lot of Arie people, I probably would have a very bad time (...) because even drawing White right now is difficult. (The hardest to draw for me are brightly-colored people).

The Elder, according to his plan sent Yama and the others elsewhere and went for the Fang with Doom. In the middle, we have a scene where Karaka takes Baam: Initially, I thought about putting in a panel that was about the Elder wanting to take Baam with him and regretting not doing so, but I thought it was too awkward to put in. He would have been awkwardly talking too much in front of Khun too. Doom's Fang keeps getting called a fang, but we don't see where his tooth actually came from hehe. We'll hear more on the Fang.

Evankhell, upon arrival, discovers a Spear of the Ancients, which seems to be a weapon used in battle between members of the Ancient Race. Generally, the word "Ancient" is applied to matters that predate Zahard's Entrence. (PS: That is, when used in it's official sense. When applied to describe a person, or a part of an expression, it is not a literal expression of that time period, but just a common adjective for extremely old. For Maschenny, Ha Jinsung is ancient, for example. Actually, most modern Rankers call Rankers that were active concurrently with the 10 Family Heads as Ancient Rankers, but Ancient Times, to be precise is pre-Zahard)

So Evankhell finally uses a Spear of the Ancients. Khun's judo flip was actually a quite challenging feat. Unlike other positions, the Lightbearer position cannot be covered for by physical power or Shinsu, so those unfamiliar, be it Rankers or even High Rankers, have trouble performing the Lightbearer Position well. Even a Regular Lightbearer can be a valuable asset.

As the hot weather pass and the weather cools, I can't believe it's already Chuseok (TN: Korean Thanksgiving, look it up) haha. Time really does go faster when you get older. As an adult, I find myself feeling "I just need to make it through another year", and also "what would I do if I could go back to when I was a student?" When I was younger, I heard a lot of "If I could go back to your age, I would study", and I used to think similiarly too hehe. I would work harder and play harder, probably...?

And speaking of studying, as a webtoon author, I have many students read my work, I have to say I feel sorry as a content creator for students who are busy studying. You hear often that even if you study, you make less than a YouTuber, or a celebrity, or a famous author (That's not true, plenty of people study hard to make good money), and while that may sometimes be true, but all of that is only possible because somebody else studies for them. Like the desk I use, or the computer or the tablet that I am using, all were only possible because somebody studied how to make them, and I can only conclude that the reason I am able to work like this is because of somebody else put in the effort for it (of course, studying isn't all there is to it.)

I wasn't actually very good student. I was a weird case where I skipped out on taking the exam for the Visual Arts Education Instructor License in my Visual Arts Education major (To my friends and juniors studying for the exam, you can do it!) but the world has other paths to success outside of study... Like someone once said that being born into money is the best and all this studying for school or for exams is all meaningless, but I say to all the students who are studying hard that as there are many paths besides studying, success based on studies is not boring but something that is valuable and amazing. I too would like to study if I had the time. Of course, that's really hard haha ㅠㅠ

Anyway, too much talk for my meager talent. I am so thankful for all of you who read my afterwords, and with our freshly-awakened ricecake, we'll see the fight with the Elder take off full swing, so please be on the look out for that.

Thank you, and have a happy weak