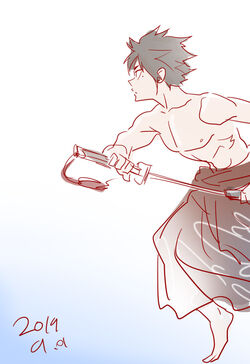 Hello, this is SIU ^^. This week's picture is Hatsu, who has a small role this arc. Donghae, the sword on his back, is actually quite a pain to draw hehe.

Season 3 is already at chapter 26. It already feels like I broke 50 hehe. I guess time goes faster when you get older, be it as a person or looking at a work.

​This chapter we see the battle of the Three Baylord Brothers. It seems that neither Doom, who might as well be declawed, and Paul can actually stand up against Yama. If Doom was in his prime, Yama may have had trouble, but now's not really the time, so... This is not enough to see Yama's true skills. Although weak in comparison to Yama, Paul and Doom are High Rankers, so they are among the strongest of the Tower.

We saw a sneak peak into Yama's past with Doom. Doom does not look like a very good older brother. Doom seems to have thought of the rest of the Hounborn besides his two brothers as being expendable, and Yama must have opposed it. Of course, does that make Yama a good leader? Well... kekekeke. He could be a hero, but not a leader in this day and age. Of course, due to how the Houndborn operate, a strongman like Yama becoming their leader makes sense.

In the later parts we see Evankhell and Yu Hansung arriving at the cage. Actually, this conversation was drawn up a long time ago, but the editing pushed it back. It was originally supposed to naturally transition as it also explained how Khun's fire worked, but in order to give the scene a more active feeling, I tied it into one.

Cage, which now even has Evankhell on board.​ How many High Rankers are here now... This Cage is rapidly becoming a dog fight.

Retrieved from "https://towerofgod.fandom.com/wiki/Vol.3_Ch.26:_52F_-_King_of_the_Dogs_(3)?oldid=132054"
Community content is available under CC-BY-SA unless otherwise noted.