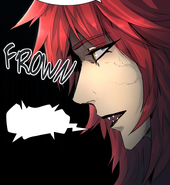 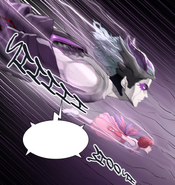 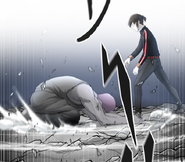 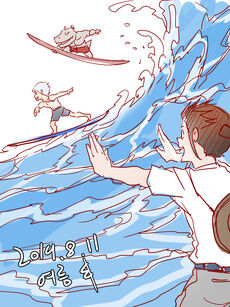 Hello everyone, this is SIU. Since it's summer and therefore hot, I decided to draw something to cool everyone off. Shinsu and water aretwo different concepts, but if someone was able to control the wave, or so to speak, he would be an amazing partner for surfers, I would suppose. I have actually never surfed myself haha.

Today we have a fight scene longer than previous chapters have had so far. I mean, this is one of Baam's fights, and there is a big distinction and the fact that Baam and a ranker went head-to-head. ​ ​ ​ The Elders's Envoy... In the Houndborn (tn: I came up with a cooler name than Dog People or dog folk) Arc, the Houndborn are generally drawn with thick lines to emphasize their power. However the envoy, I wanted to contrast with the houndborn and make him look a bit sly and sneaky. Actually, this arc itself unlike previous arcs has a constantly changing cast of enemies, so I wanted to make sure that he was visually apparent as an exceptionally annoying villain ,^^;; ​ ​ Sometimes when you go through the story, you have characters that outright scream "bad guy", and this is one of those characters. ​ ​ ​And on Baam's fight, we see Baam make the Ranker kneel. Even if he's a Ranker, there's large variety in power among them, there is the advantages and the disadvantages to consider, and most importantly he hasn't used any metamorphosis techs, so it can't be outright be said that Baam is Ranker-tier, but he can certainly be a threat. With the Thorn activated, even a Houndborn Ranker with Metamorphosis techniques would not be sure of his chances against Baam. His attack for sure at least is reaching new heights. ​ ​The fight was indeed cut short by Gado, but Baam still had a few cards he could have still played, so the match probably would have gone the same. ​ ​Anyway, we see at the end Gado and his threatening curls ^^; Please look forward to how Baam will overcome this threat hehe. Baam, now newly in trouble will be coming back next week. ​ Thank you, see you next week!! ​

When I look back, the first few years I couldn't afford to turn on the air conditioner (the computer and the tablet make a deceptively high amount of heat), but I've now reached a point where I don't need to worry about the electric bill. Because I started posting in the summer, I remember those times every summer. If someone asks me whether I have improved in line with my environment, I wouldn't know what to say in response. It is thanks to all of you guys that support me so generously that I can work in this improved environment.

Thank you. Please enjoy your cool and healthy summertime.