52F - Stealing the fang 2 (1): Khun Aguero Agnis, Rak Wraithraiser and Berdych tried to stall Baylord Doom from going further into The Cage and wait for reinforcement before Twenty-Fifth Baam and Karaka finally arrived to face Doom.

Karaka then propose Doom to play a game to retrieve his "Fang", because of the hard situation where they face 3 High Rankers at once. Karaka even has to bait Doom by risking his FUG Slayer title just to make Doom follow the rules of his game. With the game, Karaka intended to slow down the enemies and wait for Yama to arrive. Karaka then propose a challenge that Baam will fight the canine ranker R's Twin on their side. If Baam succeed, then they cannot go to chase after Khun and Berdych who has escaped with The Fang. 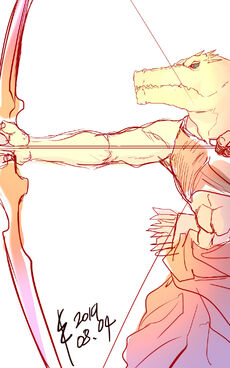 ​
Hello, this is SIU ^^ This is finally Rak with a bow. I was watching TV this morning, and they were having an archery competition. "A Revelation from heaven!"... wasn't quite what went on in my mind, but I did think to finally draw this. On a side note, the competition was held in Cheongju, which is where I grew up, so that was a nostalgia moment for me. I'd been so busy the last few years I hadn't been able to visit. I think it was also coincidnetal, but the home team was winning for the Middle School tier, so hehe, this hometown spirit I forgot existed rose up in me... I guess this is why I still cheer for HanHwa whenever I watch Baseball (...)

This is a fight between Yama and the Envoy, except it's too one-directional to be a fight. It'd take an Elder of another High Ranker for it to be a proper fight, but maybe that thing in the sky made be a variable.

Karaka and Baam arrived where Doom is, and we also see Khun strengthen Verdici using his fire before that. There may be a misconception of what Khun's fire does... But this power up does not mean a "Regular can fight a ranker" tier power up, just a multiplier on your base power. It doesn't actually revive dead people either, only those whose lifeforce is still lit. I put in an explanation because some people were getting worried. It's hard to balance the powers of the main characters due to how this genre works. But I do not want to worry you guys, so I will do the best that I can. _ _(Bows)

Anyway, Karaka offers Doom a challange with a trust in Baam's Power. Doom took him up without knowing anything about Baam....

Baam ends up facing off a ranker in the fight, and whether it be luck or skill, but Baam hits from the get-go. Doom and Paul, who sent in their pitcher expecting a no-hit no-run situation is now surprise because they have a hit. Let's see how the match will go: is Baam finally Ranker tier? Stay tuned folks. (Suddenly baseball)

I've been working out, improving my body condition. Illnesses don't go away overnight, but effort never fails. You should start working out morning and evening times for a bit ^^

Then have a happy and healthy week, and I will come back with Baam at the hitter's box. Stay healthy in the hot weather (TN: Korea is insanely hot rn)