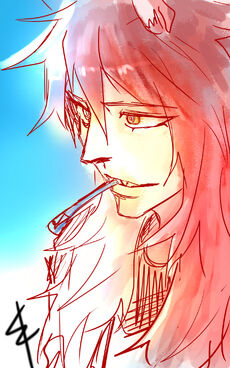 Hello, this is SIU^^ This week's afterwords sketch is Yama with a toothbrush in his mouth. Archery Rak... coming soon. Anyway. I had a sudden toothache on Saturday, so I had to quickly visit the hospital. Turned out one of my fillings fell out, so I just needed to get it redone, so that was a more relaxing weekend. Dentists are scary, even when you're an adult.

This week's chapter... reveals where that spear that hit Doom last week came from. A man named Luel Mon. The base concept behind him is a Dog Person who became an idol otaku because of PTSD from the last war. I am using a lot of key words that relate to mordern day here, which is similar to Lurker and Cash at the beginning of Season 2, but keeping it both approachable without being uncanny is harder than it seems ^^; I hope you guys enjoy these kinds of lines or concepts, but I do understand where people who feel put off by this kind of thing are coming from.

Luel Mon is a Spearbearer-Scout hybrid, which means he can both target and attack on his own. His attack range and accuracy is therefore OP, but his mental fortitude is.... You can start multiclassing once you're about Ranker tier, but cases like Luel Mon multiclassing Spearbearer and Scout almost perfectly is pretty rare. Anyway, the Spear of the Ancient Race shown today will mot likely show up after today, it seems, huh? hehe

Doom was able to survive Luel Mon's Spear is because he performed Metamorphosis partially around the targetted area. If it was a direct hit, even if he put up a guard it probably would have been fatal. Even with that kind of a parry he collapsed from shock and is having his head ringing. This chapter really shows the good side of having a good Spearbearer, which is letting you snipe an otherwise powerful enemy, haha..

As I progress through these chapters, I think that between the Rankers, the Regulars may seem a lot more frustrating or boring in comparison. Considering the lore, they may end up having different roles than the Main characters of other works. But I think that in a battlefield where they're outmatched to this degree, this is the natural consequence. It's simply that as an author, my shortcomings involve making said consequences natural and entertaining. I am always reflective of it, and I will continue to try my best. I would much appreciate it if you saw with me as the Regulars grow in power and develop.

Now we see the Envoy and Yama fight. The Envoy looks a bit gross, and I had a bit of trouble with him too. I thought about making him handsome, but that'd be too obvious, so I made him look unlikable. His mouth actually doesn't smell bad. He told me to tell you guys, just in case you guys get the wrong idea.

Now we can see Yama slowly getting into the same boat Baam and Karaka are on, but will they be able to save the Cage and solidify Yama as an ally? Where is the Elder? What will happen to Doom and those who face him? Please stay tuned.

I am keeping my neck straight up as I draw. The pain isn't soemthing I can help, but I think I will take this opportunity to work out and keep myself healthy, which is something I've been neglecting, so I have been cutting down on work time to walk, exercise and such. Everyone keep healthy during the summer, and please exercise, even if indoors^^.

With that, I will come back with Yama the Cleanmouthed next week. Stay happy, have a healthy week, and I will see you in the next one.