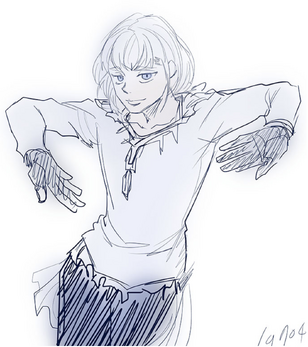 This week's afterwords picture is figureskating Khun. Khun belongs where there's ice, for sure. The image suits him well. A figure-skating Rak may be a bit more difficult. Sports are fun to draw. I used Cha Junhwan's images a bit this time too. On with the afterwords! ^^​This chapter, we see that Baam and Karaka's combo attack... still is a bit awkward haha... They woke Yama up with a stronk attack. Yama to me is like a child who needs a spanking every morning just to get him up. Of course, his body is so strong that's actually a good thing hehe. All of Baam/Viole's Piercing Wave/Resonant Wave techniques were taught by Ha Jinsung, so all of his and Karaka's techniques share the same root. Karaka doesn't use Resonant Wave techniques too many times these days, but he isn't weak in the melee. He simply chooses to maximize survival and minimizes damage intake as part of his style.

Khun's new ability is an amazing support ability. I know many of you want to see him in action right now, but I wanted to give him more abilities that fit his ranged support class. That's why he got Enna Core, the freezing ability. Khun's still a long ways away from fighting Ranker, you know hehe. I hope you look forward to more of Khun's growth

On Dang Dang's death: at first, I wanted more focus on Dang Dang at the beginning of the arc, but as the thing are going currently, I decided to keep the flashback short and reached this chapter and Doom's resurrection. I hope you guys received Dang Dang and Gado's conversation well.

Doom's up. He doesn't look complete, and he does look short hehe. Even if he has been out of commission for a long time, he was an increadibly powerful High Ranking Dog Kin. I hope you look forward to seeing what kind of a story Yama and Doom lead.

I've been writing this every week now, but I've been fighting my neck pains this week to. Sitting with my neck tilted down is strenuous, and I'm not drawing on a display tablet but a flat tablet, so I can't draw too much while standing.... I will try my best but the drawing style may slightly. However, I can still upload, and this is something I have to gradually adjust to in daily life, so I'm trying to upload without straining myself too much. If it seems too much I will let you know of any incoming hiatuses, but it's already feeling better so things are looking optimistic if I do say so myself. Drawing is a daily battle hehe.

Well, Doom's up, Yama's up, Elder's up,this has become a chapter of introductions and returns. I know I am lacking a lot, but if you enjoy my webtoon, that's all I need.

Then I hope you look forward to next week, and have a happy and healthy week.

I got archery and figure skating confused... (TN: SIU HOW those things sound nothing alike) Guess I'll have Rak compete in compound bow archery.