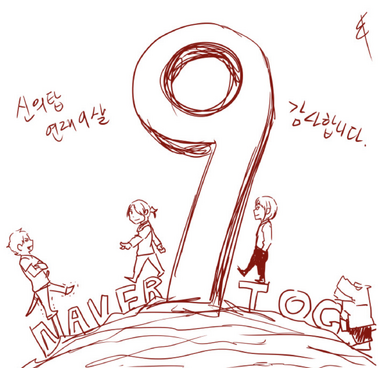 Hello, this is SIU. I was going to draw Khun shooting a bow as I said last week, but apparently we're at the 9th Anniversary of Tower of God haha... So Khun will be drawn next week, and this week I drew something for the occassion. If nothing big happens next week, I'll probably draw Khun doing some Archery---

This week, it seems that Karaka's feeling the void of his teacher more than it seems. Him taking care of Baam is less so his personal opinion on him but more so for the sake of protecting his master's legacy (despite him wanting to destroy him at one point huhu). Well, Karaka still wants the Thorn, but he still has more to unpack later.

On Dang Dang. Of course the main characters of Tower of God are Baam and his companions, but each arc has their own cast too. In this case, it's Gado and Dang Dang, so we get a lot of backstories. It would be nice if Khun could save Dang Dang, but there seems to be a great difference in firepower, so it looks to be difficult. At least the reawakened officer is helping them out. Khun 's new ability looks tempting. A miracle revival program. If he was born in the modern era, he could have become a conman AND a doctor too (...)

And Evankhell, we see the true big bad of this arc. At first he was going to have a huge, complex helmet, but I realized if I drew that, I would instinctively kill him off after only a few panels, so I went for a more simpler and darker look. Anyway, this is the first of the FUG-end Big Bad, so please keep an eye on him.

Meanwhile, I still battle my neck pains. Stetches, hospital visits, changing up work environment, pilates... ​I've been paying attention to my health so it has minimal impact on my work, even though I'm not the healthiest individual. Please take care of your bodies!

Thank you for coming in to read the chapter and the blog this week. I will return with our kiddos in the chaotic Cage, and Evankhell, who is getting heated like the weather these days .

Stay healthy in the weather that's heating up, have a happy week, and see you next week!

Did anyone ever get BaeMin coupon? They said it will go to 16 thousand people nationwide, but the odds are like that of a regular trying to become a Ranker, cuz I'm not getting it ㅠㅠ