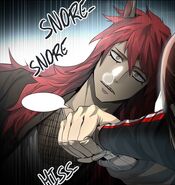 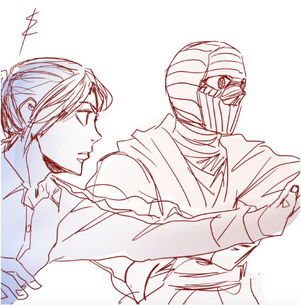 This week's theme is Karaka and Baam, like this chapter. I will draw Khun doing a sport next week. Not swimming tho, we've done that. Not really taking requests, but I will look what's there in the comments ^^

This week we have Yama's older brother's Siluette. It's smaller than expected, but ^^;; He should be strong because he's Yama's older brother. Gado tells Dang Dang to die honorably, what a load of dogcrap. People usually don't like dying, no matter how noble. Although Dang Dang looks to be in danger, but Khun's come, so we shall see what happens.​

Baam's side... it's like seeing myself back in high school when seeing Yama not wake up. When I was in high school, I had to go pretty far, so I had to wake up early in the morning, which was relaly annoying. I was only late to class once or twice, but still... I understand how Yama feels, who would sleep even if the Tower itself was collapsing. Since I'm working regularly it doesn't happen but I really used to feel it.

Actually, Yama is actually naturally increadibly a lone wolf kind of figure, so he does not like anything he does being interrupted or interfered with. It's not that Yama's bad, but it's like Pandas that are too lazy to even make babies, he was just born that way. I mean, I do see where Baam's coming from when he says he's a bully.

In the end Karaka does show up to help Baam. If you think about it, they have gotten closer, and their (for a lack of a better term) chemistry should be something to look forward to.

Since my neck hurts, I can't work long hours. As such, I'm putting in more break time, but that's only lengthening my work hour total. If I take pills, it doesn't hurt, but since it's too many painkillers I'm trying to reduce it. It does hurt a lot sometimes though. Pinched nerve is no joke haha.... The meds work when I do take them still, so I'll do my best to both get treated and work. (I"m still fine as long as I take it easy ^^)

Now that I write this, I think half of my aftwerwords have something about me being in pain keke (TN: No, more like 70~80%). Surprising to see someone like that still alive haha. Even if I work hard through the pain, making a work that makes you readers happy is still difficult, and is the biggest dilemma in the job. I'm pretty sure everyone that has a job has work-related problems or minor illnesses. Everyone working and studying, Fighting!

Well, I will come back next week with Baam vs Sleeping Yama, Karak, and Khun. Have a happy and healthy week