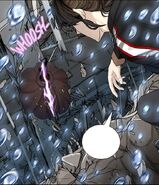 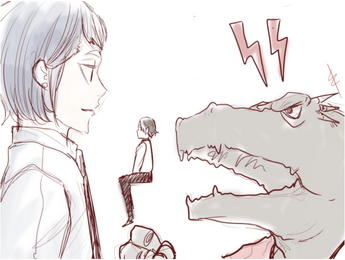 This week's afterword picture is Rak an Khun. They don't look to be behaving so nicely to each other... It actually don't have a good relationship. Haha. I'm kidding. They get closer through bickering... Now that I think of it, besides Baam, Khun actually gets along despite bickering with everyone. It's probably due to his very strong ego.

This week we had a continuation of Baam's fight.. Akryeong seems to know something. He will show up again later. As the Emissary of the Elder's Servants are entering the battle, and while combat becomes more and more complex, Baam's punching power is becoming stronger by the day. He can do this without the Thorn now.. Jorden kept up with the outside news from within the Cage, so he seemed to have high expectations for the Slayer Candidate. Please be on the lookout for how their relationship progresses in this battle.

Khun's side of the battle... Doesn't look like Paul came in with all the information. Paul's movement wasn't really teleportation. There needs to be a vague coordinate set up in the first place, and an animal to behave as a receiver must be there.

And the Michael's laughter at the end (...) personally... I love writing these kinds of characters. If you write them doing something like a psycho, it actually looks plausible (..)

Anyway Khun who just got revived is about to die again... Khun don't do it. You know how hard the other kids worked to try and save you. What will become of Khun's fate....

The weather is becoming hotter these days, which means my energy recovery becomes slower making work harder. I eat this and that while working, but as I lack exercise and sit for long hours ^^; also I get stressed easily both at work or off of work, so it's not easy during the summer. But as my kiddos all risk their lives in the Tower and fight on, I don't think it's right that I live such a comfortable life, or is that not how it works haha. It does concern me, and that can't be helped.

I was working outside and I saw students studying, and they were all working on their projects hard, so that somehow motivated me to work harder too. I know there are hard moments for everyone, but keep fighting!

Everyone stay healthy, and have a happy week. I will come back next week with Khun in trouble. These are days of tribulation for Khun ㅠ