52F - Stealing the Fang (1): When Canhong, Varagarv, Ron Mei, Rian and Luka who traveled together in search of slayer candidate Jyu Viole Grace was passing through a hallway, they encountered Michael, Apple and one mysterious person who were running away from Khun Aguero Agnis and Deng Deng after they snatched the Baylord Doom's Fang. Canhong then suspected them to be the companions of slayer candidate and labeled them as enemies. Michael who insisted to pass through Canhong's group by force suddenly was stopped by three Khun's Lighthouses. Khun then teleported at the same time through the Lighthouses and successfully land a punch to Michael's face. 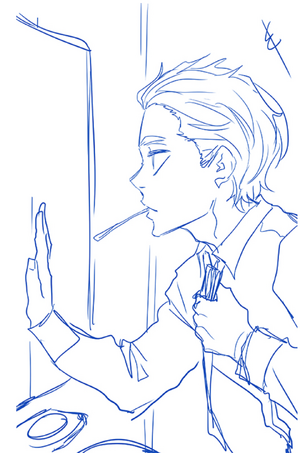 For this week's afterwords, since we got a lot of Khun, we have a Khun brushing his teeth. I think I said before that it's hard drawing Khun a few times. Although I got used to it so it's easier, but it's still challanging. The eyes, the hair, all add up to make one of the harder characters to draw. (Baam gets harder when his hair gets long hehe)​This week.. we have a lot of fight scenes happening at the same time. Since Khun was napping the entire previous arc, so I want to show more of Khun fighting this chapter. Of course, since the future is so unclear to say anything certainly about it, but I do try hehe.

Akryung uses Shinwonryu. Although the possibility of Akryung being an Irregular came up in S1, but whether he is really an irregular or what... that's to be seen later. Since now that Baam can't fight normal regulars anymore, we'll see more "special" regulars like Akryung, Princess, or Sorcerers.

Khun finally hits Michael. I was thinking whether to end on that scene. It's an extension of the relationship shown early S2, not a relationship that people non-veteran readers of Tower of God would care about too often, there being a good chance people may have forgotten or not known about this relationship. (Nor is it the main topic for this arc). But since this is a scenic continuation from S2, so I cut it there. He's the mortal enemy of to Gyetang (TN: the yellow chicken guy on Khun's Team from start of S2) who is my favorite, so haha.

When I was on hiatus, it felt like my head was empty, but now that things got busy as I started posting again, I have a lot of thoughts just a few chapters in. All things in this world are like it, but Webtoon changes so quickly in unpredictable directions it seems. Since I've uploaded for a long time now as the author of Tower of God, at this point the most important thing for me has become being able to upload, week by week without issue. Well, posting itself is a series of changes and reservation, but I do try to be an author that tries to constantly improve himself. Although I am still pretty lacking, I will try to improve this year.

Then have a happy and healthy week, and I will come back with Khun on a revengefest. Thank you for reading Tower of God and coming into the Blogs to read the afterwords too ^^ It is because of you that I was able to draw this webtoon.

Now don't get sick from the heating weather, and see you next week!