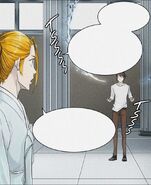 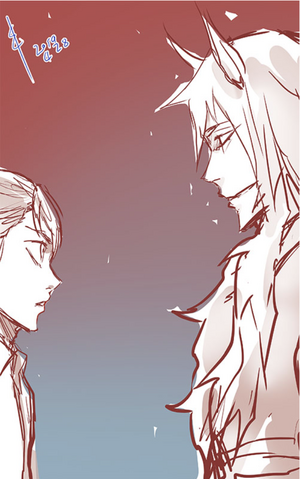 Hi there, this is SIU. For the Afterword art this week, I decided to draw Baam facing off with Yama, in line with what happened today. They actually have a large height difference; Baam would not be small if he was in Korea IRL, but Yama is monstrously huge. Lore wise, he's 270cm (TN: 106 inches, 8ft 10in). But if I draw him that big all the time, perspective and such gets hard to work out, so I adjust for the cut. Lore is lore. I think the art direction is more important personally.

This chapter, we got why I said why Baam and Yama could fight, or the conversation between Baam and Khun. Right now, he's in FUG to avenge his teacher, but if Baam had to pick the one organization he hates the most, that would be FUG. Baam doesn't have a love-hate relationship with FUG, it's just pure hate hehe. In the situation where he is forced to join hands with such an organization, you can see him try to stay true to himself.

Urek once said to Baam "Don't change", and I think that reflects Urek's character in a lot of ways. He experienced many things as he came into the Tower, and met many people, but he's still trying to escape the Tower. In some ways, he's the most faithful to his original reasons for entering the Tower. But to be fair it might be entirely because he was in another class when he came in hehehe.

In the conversation between Yama and Baam, I tried to keep the tension up a little. Yama is human, but more like a wild beast. Less of a fighting dog raised by someone, but a real wild dog raised in the wild like a great beast. If Baam's lines sounded like they were teething the line, that's good.

Whether what Baam did today helps save Ha Jinsung, but we look forward to seeing Baam acting like himself as he moves forward. That's what makes everything fun ^^;

Recently, I've had some difficulties in personal life, but when those come up, to keep myself sane as I work, I tended to be drawn to sweet things. So that's why I'm getting fat again, I think(..) what I eat should show for how I work... I wonder if it is. I'll hold onto my mental health, and keep working at it.

Recently, it got cold again after a bit of a drizzle. Everyone, don't catch any colds and stay healthy. Eat seasonally appropriate food. I hope you look forward to next week, stay happy, have a good week, and see you next week.