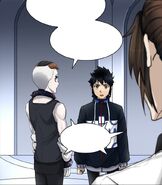 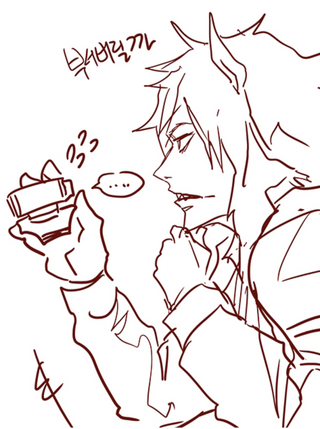 This week's image is Yama contemplating blowing up a ship. A High Ranker can blow up a ship no problem, but when you think of who's on board (Karaka, Madorako), it'd be hard for someone not Yama's tier.---

This week we have more of Deng Deng's escape continuing from last week. We have Baam outright beat the Mad Dog. Actually, Varagarv could be considered one of the strongest C-Tier Regular, but even for him, Baam's grown way too powerful.

We also have a new technique for Baam. It's not a new Wave Piercing technique, but rather a version of the basic Wave Piercing technique performed in the state of Zero,. It's weaker than Floral Butterfly Wave Pierce, but it's the version closer to consolidating his basics. Baam was taught all these powerful techniques by force before, but now he's learning from Zero step by step but swiftly from the zero up.

The Regulars of the Ha Family this time are all basically those who cleared all the floors and had earned the right to become a Ranker, but refused to become a Ranker, so it's really iffy to call them a Regular. It's like getting into medical school with top grades, but you suddenly decide you don't wanna (gasp x2). Or getting through Law school, Public Servant license, or International Relations exams to become a public worker and suddenly choosing to become unemployed, despite even having experience (gasp x3) I wouldn't know why they would want to live like that hehe. It is true that they are weaker than those who taught Baam in the past (Yu Hansung, Ha Jinsung, God Of Guardians, Data Eduan, Evankhell), but Evankhell introduced him for a reason, you can infer. Probably because he trained to the fullest as a Regular, perhaps she thought Baam had much to learn from him.

On the scene where Baam and Khun meet, I thought about how happy I should make them look kekeke. Baam and Khun are both very happy, but they already talked over the phone, and there's still a lot that needs to be talked over, and due to how Khun's personality is, he's going to take those things without missing them... Above all else, from Khun's perspective since he's seeing Baam working from the FUG again, which he never liked, it may be hard for him to show his full joy. It may be pointless, but that gave me a bit of trouble during editing. Haha. Khun talking about Baam's hair is in a similar vein as well. Now that I write it down I think that I'm thinking about all sorts of petty stuff, but still, this is a webtoon a lot of you read, and I want to make sure as many people as possible can understand and have fun, so no matter how much I try, I still have many deficiencies. I should work harder.

At the end of this week, we suddenly hear that Baam may fight Yama... Did studying under Evankhell finally make him a fighter? Hehe (Of course, knowing Baam's personality, it would be out of character for him to just hand him over). I hope you look forward to how that goes next week.

I thought the weather was gonna get warm, but since it rained it got chilly at night. There are big temperature fluctuations, so please make sure you don't get sick ^^. Everyone, please have a happy and healthy week, and I will be back with aggressive (?) Baam next week.

See you next week ^^