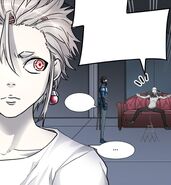 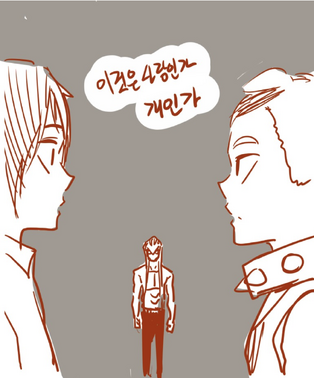 I was taking a walk outdoors and saw a lot of Sakura flowers.

It think good weather for going outdoor is approaching

Even though I don't go outside a lot, I really like these kinds of weather.

I hope you readers can also enjoy this weather.

I will hold on to Yama's story, which is going to be the main plot, for a bit

But Baam sneaking into where Deng Deng is at.

Since background is background, mad dog appeared after a while.

Because mad dog was introduced strong in workshop battle,

so I thought it would be good to make Varagarv and Baam having a match.

Even though Varagarv has Blood Tamara and really strong out of Regulars,

I would be thankful if you wait for their battle a bit.

I was planning to make the story for sneaking in fast,

I think this episode's plot speed could look different if you look at it in different perspective.

If you look at it in Baam's (as regular) perspective, I think this is pretty fast,

but if you set Baam as in equal level as characters that appeared in the last station, I think it might not be that fast.

I was already thinking about this problem since last episode,

I am aware of it and making the story flow.

Though I think it'd be best if you set your perspective at Baam and his companions.

Well, with any story,

If you enjoy it slowly, then after there will be time where there would be fire exploding in plot,

I think if you go throught these little stories,

and wait for important parts.

I don't think it matches with his title powerful rug rat

I would be thankful if you wait and ecpect what will happen next episode.

I hope you have nice week along these Sakura flowers.

Thanks to yall, I could go through this spring still having tower of god continued.