Khun Aguero Agnis and Rak Wraithraiser are shown to be taking a test. Baam meets Yool, the snake guy, and Kell then Yool proceeds to fight with Baam but loses badly. The snake guy then tells Baam that he has his friends as hostages and will kill them if Baam doesn't cooperate. Yool wants to join in to save Ha Jinsung and he also says he knows where he is located at. Ship Leesoo tells Khun that he overdid it for the C-Rank test who is now a C-Rank Regular. Madoraco's ship is headed towards Baylord Yama's mother ship called 'The Cage' where Baylord Yama finally reveals himself.

Baylord Yama, 7th slayer of FUG
Add a photo to this gallery 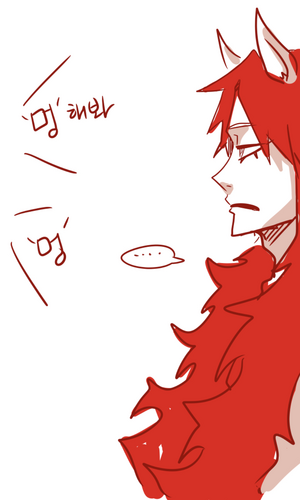 Hello, this is SIU. Sunday's around once more.
It's a Monday Webtoon, but it feels like it's a Sunday webtoon these days haha. (And I think I get more views Sunday than Monday, I speculate.)Actually, Monday Webtoons usually get uploaded in advance on Friday, but sometimes I make changes over the weekend and update it. Some of my colleagues and I argue over this, because while it improves this chapter, it hurts the next one, and basically this kills the free time... I lost the debate hehe. Now that previews exist all that's moot tho ^^;So The Snake Man got beat up a lot. He's meant to get beaten up, don't worry. If you wanted him to have a fair fight with Baam, I'm sorry, but if there's any C-class Regular that can stand up to Baam right now, it'd be against the lore. So Baam gets to be OP a while, a chip to his shoulder. It looks like Snake Man's real core is his boss. How it will behave... be on the lookout. Looks like on Khun's side, looks like he needs cold meds, he's seeing things. And lastly, we have a new slayer. We don't see much, but he looks buff haha. I should work out now that it's summer (TN: Boi It's still freezing over in Gangwon)... I've been working out during hiatus, but not currently ㅠㅠ. Since the previous fights were so big, the demand for Slayers has been pretty low, But Yama is older than Karaka, so he's stronger, has more forces and cash. It's only the beginning, so be on the look out for what kind of a person Baylord Yama the Slayer is. Now that spring's coming, everyone have a safe and healthy week ^^ I will work hard to come back next week. Thank you _ _ (TN: That's a bow)[1]

Retrieved from "https://towerofgod.fandom.com/wiki/Vol.3_Ch.04:_52F_-_Deng_Deng_(3)?oldid=146438"
Community content is available under CC-BY-SA unless otherwise noted.