After meeting Yeon Woon one hour later, Ship Leesoo, Hatsu, and the little blue dwarf heads in a door and Ship says not to threaten 'him'. One hour earlier Yeon Woon said he lost his fire power because to used it all up to create a hammer for one of the Dooni. The Devy that received the hammer became very powerful and went on a rampage. So they are going to have to get the hammer back in order to break Khun out. Ship Leesoo acted in front of the Devy saying that the blue dwarf's family members were killed and wanted the hammer to get revenge on the Khukums. The Devy was convinced and gave the hammer to them easily. After getting the hammer back, they used it to break Khun out of his ice. Khun quickly recovers and wakes up. There is a rumour that Kallavan was forced out of his position of Commander and is now a prison guard for Ha Jinsung. After Ship and Khun's conversation, Baam is shown to be retreating after receiving a call from David Hockney. Baam meets up with Hockney and Lo Po Bia Elaine afterwards. Later the two regulars appears on their ship and shoots a laser beam at Baam's ship and the guy with snake hair tells Baam to come out and fight.

Baam and his amazing size of orb

Baam escaping out of dog shelter 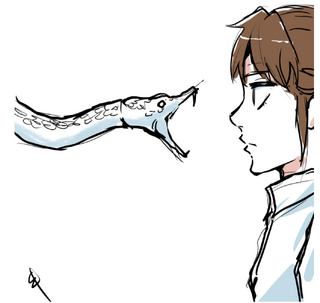 
It had a lot of things going on compared to the previous episodes.
Anyways, it's been three weeks from coming back, and my right arm is beginning to fall o..(uh no come backTT) And since a lot of people welcomed me back, I think I'm going to continue the story in a calm way for a while. Having a fixed mind...It's never easy. haha, but it is required for long webtoons.

Anyways, this episode was long...super long...
One of the main thing that I was worried about while making saved versions was
how long this episode should have been.
Of course, the previous episodes were long, but wasn't as long as this.
How long should 'waking Khun up' take...


Wake him up after one episode
Or make a lot of things in between and make something really detailed
Or simply focus on one thing...anyways,
Personally, I like this kind of structure with episodes,
But when it takes a long time,
this kind of structure takes longer time to prepare and it gets too long, so it's tiring.
So, I felt like doing this during hiatus..and tried it this way this week.
Well it wasn't something amazing, and there were a lot of excluded contents. Personally, I achieved the goal of waking Khun up in one episode haha


I hope you enjoy reading this episode.
(It took a long time to draw though TT) Well...Since he woke up He may as well as start working
And at last part The mystery snake guy who attacked Yeon Yihwa appeared.
I hope you watch to see how the episodes will go on as.
The thing that I am thinking about these days is that
I'm not that special but somehow I'm continuing with my piece so long,
so I'm really lucky-
So I think it is better to keep my place than be ambitious about it.
If you read it like yourself, I hope you get excited with the next episode of Tower of God
Take care and be happy!