Xia Lulu engages in a fight with Twenty-Fifth Baam but Baam quickly disappears. Xia Lulu then receives a call from her boss who ordered her to catch them or kill them. Louie does not trust Baam and thinks he is using him to get closer to Deng Deng, but Louie has no choice but to receive Baam's help because he is strong. David Hockney tells Baam where to go and then he jumps off a cliff. Xia Lulu heads to the drainpipe believing they will be there and she was correct. Xia Lulu's boss appeared with his henchmen who were all slaughtered by Baam later. This surprise everyone and the boss jumps down to confront Baam himself but his attacks were useless and Baam prepares a giant Shinsu Orb above his head. One of the natives of the 49th Floor took Ship's Team and Evan Edrok to Yeon Woon and when they met, Ship Leesoo asked if Yeon Woon can help his friend. 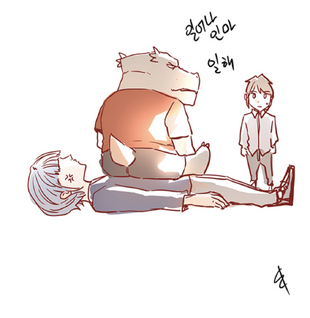 The picture for this week is Khun getting salary while he is sleeping(...)

It's only been 2 weeks since hiatus but it feels like it's been months.

Well, that could be also because I worked before I came back from hiatus

but also because a lot of people welcomed me back and responded when it was a long time.

Just like something that should have been discussed through months but combined into one week...

I'm really thankful though I'm not sure I would be able to make it to your expectations.

But even after long term of hiatus, but with a lot of people welcoming,

I think it is something that I should be thankful as an author.

Thanks to everyone who commented that I'm coming back, about mistakes that I made, and also about what I could do better on.

This week, Baam has became a lot cool? I think.

I wondered a lot about this part. Maybe it would be hard going back to the personality of Viole at the beginning,

I thought making Baam feel like a stronger character would be ok..

But I thought I would be better to have gaps in between, though his cold side also shows.

Of course, internally, Baam has a lot 'kindness' setteled in his mind,

so I don't want to change that kind of basic characteristics.

He can make orb that big without thorn, so I think his skills got upgraded.

Starting this episode, I wondered a lot about how to shortly solve out many characters' many stories.

Khun's story which would be coming out next week would also be one of the many stories.

Would Khun be able to wake up after half a year of sleep..

To be honest, I'm working outside faraway from my house,

more like since I didn't have rest during hiatus and have more time, I think being able to breathe fresh air outside would be one of the benefits for this job.

Though I also wonder if I should be thankful or not to go outside during weekends haha.

Anyways, I can see night sky very well from here

I would get good spirit from it and draw

So next week, you can look forward to these. Would sleeping(?) Khun be able to get up, and how Baam would continue his journey after becoming so cool.

I hope everyone will have happy week

and have healty week