30F - Closure (5): The chapter picks up where the previous chapter ended with Khun asking Viole if up ahead was where the Thorn was and where Reflejo would be, which Viole confirms. Viole then asks Khun how he knew Androssi had such a weapon. Khun answers that Emile told him and Viole reminisces that he and Hwa Ryun would use Emile a lot. Khun realises that he had begun relying on Emile a lot recently and contemplates at how it could be the most fearsome weapon in the Workshop. Viole snaps him back to reality, whilst Rak struggles with how to use his new weapon. Khun then relays that Androssi and Hatsu should currently be at Mad Dog's location and, while the two buy time, the rest of them would rescue the hostages and escape as quickly as possible. With no time to lose the three enter the room. Upon entrance, a shocked Viole exclaims after seeing a bloodied Hwa Ryun on the ground.

On board the getaway ship, there is commotion as the passengers find out about their delayed departure. Lero-Ro asks for an extra thirty minutes and he is told that it would be fine, but any more and 'they'll' notice. Sophia then asks Lero-Ro if they are trying to escape the place and he confirms her question. Having acknowledged their intentions, she asks if they would take Beta along with them as he would only be abandoned if he returned to the Workshop. Lero-Ro notes that they had no medicine but Sophia mentions that there is a month's supply on their ship. Sophia begins telling Lero-Ro of her similarity to Beta, in being an illegitimate child, and how she got lucky by becoming a Workshop researcher. After getting the job she wanted to help children that were in a similar situation as her, so she got involved in the Living Ignition Weapon experiment; she had theorised that if it succeeded the abandoned children could have power so that no-one would bring them anymore pain. She goes on saying that when she saw Horyang and Cassano again, she thought her initial plan had been successful, but it wasn't the case. In a flashback to the scene where Viole is talking to Sophia, Viole told her that Horyang continuously repeated the name she gave him (Ilmar) during the experiments so as not to lose himself from unbelievable pain. It was at that moment that Sophia understood that giving them a name was enough to make them happy. It cuts back to the present where Sophia explains that she didn't realise that the research was making the children unhappy. She then pleads to Lero-Ro to let Horyang, Cassano, Beta and Viole escape the Workshop so that they could experience happiness. Lero-Ro concedes that he'd try his best.

Suddenly Beta wakes up uttering Cassano's name and then shouts out that it was Cassano that made this all happen. Beta then begins wondering what Cassano's goal was, why he let him out of his room and why Cassano was even at the Workshop at all.

Over at Mad Dog's location, Ron Mei wonders why a Princess was there and asks where Viole is. Androssi tells her to shut up and stop looking for other people's boyfriends. Ron Mei asks in surprise if she actually has a boyfriend and Androssi retorts that she wants to "try her hand at this love thing". Hatsu then reminds Androssi that they didn't have to fight them to the death just buy the others some time to rescue the hostages; once that was done they too would be escaping. Androssi calmly states that she knows and asks that he not stand so close to her. She then accuses Ron Mei of betrayal and Ron Mei doesn't deny the allegation, explaining that was the whole point of being friends with Anak. Androssi gets irritated and says "spoken like an annoying bitch" and then states that she wants to crush Ron Mei's face but would hold off because she has an upcoming date. Ron Mei then taunts her saying she'd get screwed over if someone found out that a Princess was dating; like Anak's mommy .

Everything goes silent. Then, in a flash, Androssi launches herself at Ron Mei but her ferocious kick is blocked by Varagarv, who takes the strike to the face. She smugly notes how annoying it was that Ron Mei had a bodyguard, but is alarmed when a small part of her lower leg is suddenly blown away. Varagarv then coldly taunts her by saying that she risks her life carelessly.

Back with Khun's group, Viole frantically calls for Hwa Ryun to which their assailant assures him that she is still alive, "for now". Reflejo notes Viole's arrival and tells him to begin the "final" match. The three look on and notice that his form is changing. 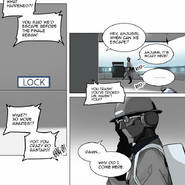 Green helmet guy on the ship 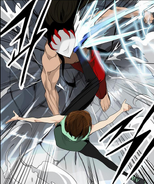 Taking a kick to the face!

Androssi losing a chunk of her leg

Hwa Ryun in a bloody state 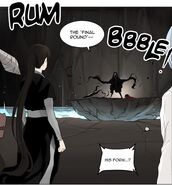 Reflejo going HAM
Add a photo to this gallery

This is the afterword for Chapter 99.
I was able to write it in time today, haha.

Actually, many of you have been telling me to take a break to recharge,
and it's something I myself have thought, and continue to think, much about.
A while ago, I also considered a hiatus for similar reasons.
However, the Workshop Battle is coming to an end,
so I'm not planning to take any long breaks.

You could say that the battle scenes are the highlights of this chapter forward.
I actually wanted to dig deeper into Sophia's relationship with the kids,
but since readers seemed to focus less on that topic,
I decided to be less greedy, haha.

Many of you asked me about who the heroine is,
but there's still a long way to go, haha.
It's Rak for now...

Well then, have fun watching the Winter Olympics,
and I hope to see you next week.

Retrieved from "https://towerofgod.fandom.com/wiki/Vol.2_Ch.99:_30F_-_Closure_(5)?oldid=149251"
Community content is available under CC-BY-SA unless otherwise noted.