30F - Closure (4): The chapter begins with the announcer recommending the audience to take shelter for their own safety as prisoners have been set free due to a 'system error'. Meanwhile Madoraco watches on and muses about how Viole's friends were attempting to escape during the Workshop Battle. He thinks of making a move even if there will be some collateral damage. Suddenly a person enters his room to tell Madoraco that a messenger from the Tournament area had arrived; he questions who the messenger is.

Rak and Yihwa stare in awe as the item 'Mad Shocker' is summoned. Someone questions Lero-Ro's previous statement that they will be escaping before the finals of the Workshop Battle, which Lero-Ro confirms and adds that it would be the only time, since everyone will be in the same place. He goes on to say that Baam was the prize for winning the Workshop Battle and, since they had already summoned him, there was no reason for them to stay. Khun asks how and where they would escape to since FUG's Rankers would catch up in no time and Lero-Ro replies that Wolhaiksong has a ship waiting for them. Khun exclaims in surprise and asks why such a dangerous group would want to help them. Lero-Ro then asks Viole if he remembers meeting Urek Mazino a few years ago. Viole says he does and is met with shocked responses from Leesoo and Khun. Lero-Ro continues by mentioning Urek's credentials and states that he is one of the founders of Wolhaiksong as well as an Irregular, like Viole. Lero-Ro tells Viole that Urek had become interested in him and wanted to meet him. Viole begins to reply but is cut off by his Pocket ringing with Yuto calling him. He asks if she has escaped and is met by the voice of Reflejo who taunts Viole about her capture. Viole demands to know what he has done to Hwa Ryun and calmly replies that he "looked after her". Reflejo finishes by saying that if Viole didn't come to her rescue, both her and the other two with her would die painful deaths. Viole calls his bluff but Reflejo continues by goading him to "start the final match", setting conditions on what would happen if he won or lost and telling Viole he would be waiting where the Thorn was.

Khun asks why Hwa Ryun was present and it is revealed that Yuto was Hwa Ryun; Khun begins processing all the information he had received and contemplates what would happen if they rescued and then followed Hwa Ryun. Viole cuts short his thoughts by telling them he will go and rescue Hwa Ryun. Leesoo objects his actions saying it would be a trap and Lero-Ro agrees adding that it would be dangerous and that they would need to leave soon anyway. Viole firmly retorts that he would go regardless as it was an issue he must deal with himself and that they would die if he didn't. Leesoo continues to pleadingly argue with him and Khun thinks to himself how Viole hasn't changed, which is fortunate for him. Khun conforms with Viole's actions and, after asking how long Lero-Ro would wait for them, begins to orchestrate the rescue of Hwa Ryun, Novick and Horyang: he assigns himself, Viole and Rak to go for Hwa Ryun, Quaetro and Leesoo to go for Novick and Akraptor and Yihwa to go for Horyang. He finishes by telling Lero-Ro to leave with anyone that makes it back once the given time is up. Khun then says that it was getting boring anyway with Leesoo continuing to say it's a bad idea to perform a rescue. Viole says it would be be better for him to go alone but Khun interrupts him and chastises him for wanting to go by himself after they had just reunited. Khun then thinks that if they were still there due to an error then she must have been summoned as well, and his thoughts are confirmed when they all hear her ranting about being summoned so slowly.

Ron Mei asks Reflejo if Viole will really come and he answers that there is no way he wouldn't, since he only chose to become a FUG Slayer to protect his friends. Suddenly a red light descends from the sky and an annoyed Androssi complains about her make-up being faded due to her late summoning. With Hatsu beside her, she continues to complain about her being thrown into a weird situation straight after being summoned. Ron Mei, confused at the Princess' sudden appearance, asks where Viole is. Meanwhile Viole, Khun and Rak walk towards their impending battle. 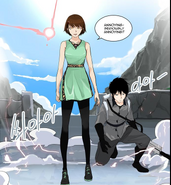 Hwa Ryun captured, Reflejo is waiting
Add a photo to this gallery

The final fight of the Workshop Battle begins.

Sorry.
In the end, it took one week to write the afterword.
More than anything, I apologize for making many people worry.
It’s all my fault.
Please don’t worry so much. hehe

Trying to write the afterword after so long sure is tough. kuku
It was only a week of break!!

It’s been a while since Urek’s backside as well as Androssi has made an appearance.
Many people say that I only draw favourite characters pretty,
but that’s not true. hehe

It’s just that in important time or entry scene I try a bit more.
It has nothing to do with what characters are more comfortable.

Because of my wrist problems, I haven’t been able to put as much details.
I wonder if that was the source of such complaints...^^;;

There have been many asking about my wrist status.
Perhaps delaying the surgery; it’s not that I’m drawing after recovering,
as it’s at the point where recovery without surgery isn’t possible.;;
I also wish it was possible for it to suddenly heal magically. kuku
More than anything, because of the wrist,
I worry about the things being cut out from the chapters.

Then, I hope you enjoy the next chapter as well,
and thank you for cheering me on.

Thank you very much~!

Retrieved from "https://towerofgod.fandom.com/wiki/Vol.2_Ch.98:_30F_-_Closure_(4)?oldid=149250"
Community content is available under CC-BY-SA unless otherwise noted.