30F - Closure (3): Cassano silently looks on as Reflejo praises him for planting a tracker in Horyang's pocket saying, "Even the Guide couldn't have seen that coming". Reflejo then states that it was a good decision to keep Cassano in their team. Cassano replies, asking for what was promised to him. Reflejo answers that it is ready, but that Cassano would have to forfeit the tournament in order to get to the Archimedes. Cassano says it won't matter since he has no business with them anymore causing Reflejo to ask what his real goal was; he answers that he wants to destroy everything starting with Reflejo and including Jyu Viole Grace.

It cuts to a flashback, four years ago, when Baam's old team were on the 25th Floor. Leesoo is running after Khun asking him if it was really how he was going to leave. Leesoo worriedly asks if he's just going to go without saying goodbye to the others to which Khun says that it had already been decided and to tell "the alligator" nicely once he had woken up. Leesoo wonders how it came to this and asks Khun what it would've been like if Baam was still alive. Khun says it sounds like a dream and it would feel like waking up if he was still alive. It cuts back to the present with Rak happily hugging Viole's return. Leesoo and Hatsu watch the happy reunion with Leesoo mentioning that the strongest team were back and that they should watch out for them.

Akraptor notices Yihwa and asks her what she's staring at. She replies that she's surprised that Viole could have such an expression on his face. Akraptor says he thinks it looks nice and she says, "That's the problem". Viole walks over greeting them with Akraptor congratulating him on his return and then asking where Horyang is. Viole looks down and tells him that he is still in the match area, then apologises for returning alone. Akraptor tells him not to worry. Viole then asks how Wangnan is doing and is told that he is recovering thanks to a medical machine on transport that the Workshop guys brought over. Akraptor puzzles how Wangnan is still alive after the injury but is glad he is. Viole goes over to where Beta is and asks Sophia if he'll be alright. She says that he's no longer in a critical condition anymore but that the trouble is only just beginning. She laments her efforts in trying to make the Living Ignition Weapons perfect and blames herself for what happened. However Viole says that he thinks the reason Beta, Cassano and Horyang weren't happy wasn't because they weren't perfect.

Leesoo asks a concerned-looking Khun what he is worrying about, since they'd won the tournament and got Baam back, and Khun replies that the real problems are just beginning. Khun lists the reasons why and then states that he can't think of a way out this time. Just as Leesoo begins asking about what will happen to the match, Lero-Ro makes his entrance and tells them the match will be on hold for a while due to the trouble the Workshop will be having upstairs. Madoraco is then seen looking on in frustration. Lero-Ro continues saying that his "ally" should have arrived at the participants' waiting area to use the Summoning system. He'll then summon all of their friends to the ship Lero-Ro arrived in. As Khun begins to realise what Lero-Ro is getting at, Lero-Ro confirms his thoughts by saying that they would all escape the place before the final match starts.

Varagarv is seen standing over Novick and a body is seen lying face down on the ground. Reflejo then says to tell Jyu Viole Grace, "Let's begin the 'final' round".

What is Cassano's true motive? 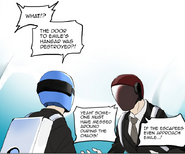 The door to Emile's hanger is destroyed 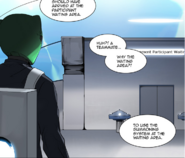 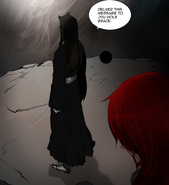 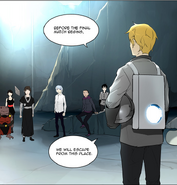 Retrieved from "https://towerofgod.fandom.com/wiki/Vol.2_Ch.97:_30F_-_Closure_(3)?oldid=149246"
Community content is available under CC-BY-SA unless otherwise noted.